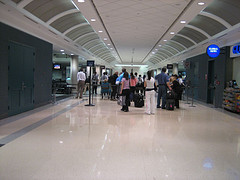 Imagine you work for the TSA. You might be all too aware of public criticism of airport security procedures like pat-downs and removing shoes. You might feel proud to serve your country. You might be glad to have a job in this economy.

Being brown, you might also be required to play the role of terrorist in a training drill, taking a mock bomb up to a Minneapolis-St. Paul airport security checkpoint. And, oops, your boss might forget to tell airport police that the drill is happening, prompting an armed response.

According to information released Monday by MSP airport police, the May 12 security test included a device in a shaving kit made to look like a bomb. It was a cylinder with wires connected to a wrist watch. The device was brought to a passenger security checkpoint, according to airport Police Sgt. Mark Ledbetter, one of the responding officers.

“Upon arriving [at the checkpoint],” Ledbetter wrote in his report, “TSA [Transportation Security Adminstration] screeners were out with a male who appeared to be Middle Eastern in descent or Indian/Pakistani.” (StarTribune)CAIR complained to the Department of Homeland Security that using a person who looks to be Middle Eastern or Indian/Pakistani this way to test security screening procedures reinforces negative ethnic stereotypes, and that this is part of a pattern of stereotyping and inaccurate information used by trainers to the nation’s security personnel that should be investigated. A TSA spokesman stated the agency conducts “thousands of training tests each year, and the individuals carrying out the testing are [of] various ethnicities, ages and appearances, just like the traveling public.”

The TSA seems to be suggesting that selecting you for this training test was a random choice. Being randomly selected happens and doesn’t always feel so random, for example, when you’re going through airport security. Sometimes it’s quick and relatively painless. Other times it’s like having a scarlet T on your forehead. Always you hope you don’t get picked. Sorry you got picked, TSA guy.

CAIR argues that you’ve been used to reinforce a hostile, discriminatory lesson about who is a threat to our national security. It wouldn’t be the first time the government used one of its own citizens enlisted in service to protect our nation, to show what the enemy looks like.

During basic training in Quantico, Va., Don Mitsuo was ordered by his drill instructor to wear the clothes of a Viet Cong soldier (Whelchel includes photos of Sam Yorunga dressed up as the enemy for the U.S. Army). Mitsuo was then made to stand before his fellow marines while his drill instructor shouted, “This is what your enemy looks like. I want you to kill it before it kills you.” (Japan Times)

Miyoshi, who fought in Vietnam, describes an incident that happened in his Marine officer training. One day a drill instructor ordered Miyoshi to get up on the podium and stand at attention in front of his fellow trainees. Pointing in his direction, the instructor told the class, “This is what the enemy looks like. Kill it before it kills you.” (Asian America through the lens, by Jun Xing)