This is an American-focused weblog, but the internet knows no borders, so there are browns from all over who leave comments and post. It’s interesting to get different perspectives (OK, most of the time!). But on the heels of Taz’s post on the 2010 US Census data release I thought it would be interesting to revisit how “South Asians” are distributed outside of South Asia. To do that I had to look around for ethnic data on a selection of nations with large South Asian populations.

There are some qualifiers here. Since the non-Indian South Asian data for the USA isn’t released yet, I just looked at Indian Americans. This is “good enough for government work” in the USA I think because the brown community is overwhelmingly Indian origin. In contrast that would be a really bad approximation in the United Kingdom, where half of the brown community is non-Indian (this includes into the Indian class those who arrived from East Africa I believe). The distinction between Indian and non-Indian also gets into the “not-even-wrong” category if you are looking at the West Indies, where most South Asians arrived before partition, and so were all “East Indian” no matter where they were from (though I know that in places like Mauritius there is sometimes a post facto identification with post-partition nation-states, often based on religious divisions). Finally, for some Gulf Arab nations the demographic data is nebulous and hard to get. Part of this is due to the fact that the South Asian Diaspora in places like Saudi Arabia is quite transient, and the probability of actually becoming a citizen is low. I couldn’t find Saudi data easily, though it seems likely that there are several million South Asian residents of Saudi Arabia at any given moment. But it seems agreed upon that the United Arab Emirates is about half South Asian, and this community is arguably the most rooted, even if they don’t hold citizenship, so I’m including it in the comparisons.

Below are two scatterplots which show the absolute numbers of browns vs. the % of browns in a given nation. The second plot is log-transformed percentage so you can compare the proportions at the low end of the scale. 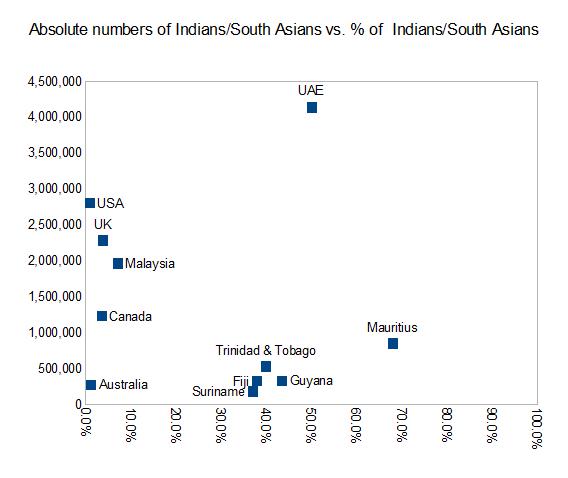 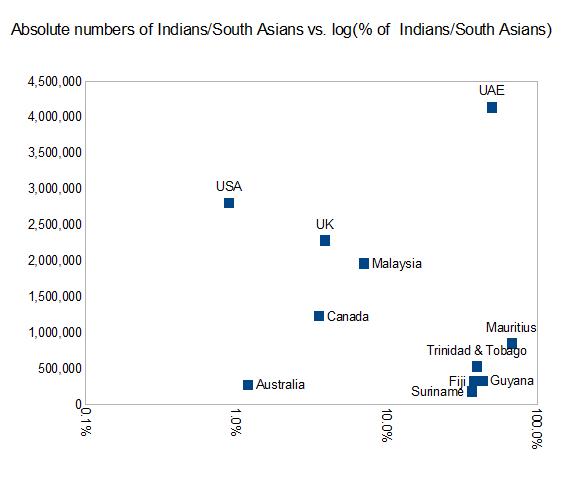 The USA absolute number is a mild underestimate. I know that the UK has a relatively small population in relation to the USA obviously, but it still surprised me a bit that the USA now has a larger brown community than the UK. Despite this the proportions and concentrations obviously differ, ~1% in the USA vs. ~4% in the UK. And there’s really nothing like the Tower Hamlets, Leicester, and Bradford in the United States. Edison is the closest equivalent, but it has a population of ~100,000, so it lacks the scale.

13 thoughts on “Where the browns be internationally”