This is going to be the most talked about article since Amy Chua’s. Every South Asian American man visiting this site should read the whole thing. Here are just some of the attention grabbing sections from Wesley Yang’s piece in New York Magazine, broken out for our readers (and these excerpts are from just the first half of the 11 page article). First, what a school with admissions based purely on test scores looks like: 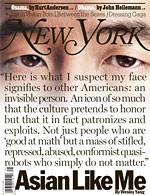 Entrance to Stuyvesant, one of the most competitive public high schools in the country, is determined solely by performance on a test: The top 3.7 percent of all New York City students who take the Specialized High Schools Admissions Test hoping to go to Stuyvesant are accepted. There are no set-asides for the underprivileged or, conversely, for alumni or other privileged groups. There is no formula to encourage “diversity” or any nebulous concept of “well-­roundedness” or “character.” Here we have something like pure meritocracy. This is what it looks like: Asian-­Americans, who make up 12.6 percent of New York City, make up 72 percent of the high school.

This year, 569 Asian-Americans scored high enough to earn a slot at Stuyvesant, along with 179 whites, 13 Hispanics, and 12 blacks. Such dramatic overrepresentation, and what it may be read to imply about the intelligence of different groups of New Yorkers, has a way of making people uneasy. But intrinsic intelligence, of course, is precisely what Asians don’t believe in. They believe–and have ­proved–that the constant practice of test-taking will improve the scores of whoever commits to it. All throughout Flushing, as well as in Bayside, one can find “cram schools,” or storefront academies, that drill students in test preparation after school, on weekends, and during summer break. “Learning math is not about learning math,” an instructor at one called Ivy Prep was quoted in the New York Times as saying. “It’s about weightlifting. You are pumping the iron of math.” Mao puts it more specifically: “You learn quite simply to nail any standardized test you take.”

But it won’t last into college:

Colleges have a way of correcting for this imbalance: The Princeton sociologist Thomas Espenshade has calculated that an Asian applicant must, in practice, score 140 points higher on the SAT than a comparable white applicant to have the same chance of admission. This is obviously unfair to the many qualified Asian individuals who are punished for the success of others with similar faces. Upper-middle-class white kids, after all, have their own elite private schools, and their own private tutors, far more expensive than the cram schools, to help them game the education system…

“The general gist of most high-school movies is that the pretty cheerleader gets with the big dumb jock, and the nerd is left to bide his time in loneliness. But at some point in the future,” he says, “the nerd is going to rule the world, and the dumb jock is going to work in a carwash.

“At Stuy, it’s completely different: If you looked at the pinnacle, the girls and the guys are not only good-looking and socially affable, they also get the best grades and star in the school plays and win election to student government. It all converges at the top. It’s like training for high society. It was jarring for us Chinese kids. You got the sense that you had to study hard, but it wasn’t enough.”

p>The Bamboo Ceiling, one of the main themes in the article, struck a chord in me. Recognizing this all too obvious trap is part of the reason I quit my last job for something more risky and why being and entrepreneur seems to be a more popular choice than even being a doctor among the Asian crowd these days:

While he was still an electrical-­engineering student at Berkeley in the nineties, James Hong visited the IBM campus for a series of interviews. An older Asian researcher looked over Hong’s résumé and asked him some standard questions. Then he got up without saying a word and closed the door to his office.

“Listen,” he told Hong, “I’m going to be honest with you. My generation came to this country because we wanted better for you kids. We did the best we could, leaving our homes and going to graduate school not speaking much English. If you take this job, you are just going to hit the same ceiling we did. They just see me as an Asian Ph.D., never management potential. You are going to get a job offer, but don’t take it. Your generation has to go farther than we did, otherwise we did everything for nothing.”

The failure of Asian-Americans to become leaders in the white-collar workplace does not qualify as one of the burning social issues of our time. But it is a part of the bitter undercurrent of Asian-American life that so many Asian graduates of elite universities find that meritocracy as they have understood it comes to an abrupt end after graduation. If between 15 and 20 percent of every Ivy League class is Asian, and if the Ivy Leagues are incubators for the country’s leaders, it would stand to reason that Asians would make up some corresponding portion of the leadership class.

p>Yang brings up a lot of searing issues that us Asian Americans (men especially) in our late 20s and 30s are recognizing in our own lives. One “scene” in his article describes how changing this pattern is a lot like learning to pick up women:

All of this is taught through a series of exercises. “This is going to feel completely artificial,” says Jones on the first day of training. “But I need you to do the biggest shit-eating grin you’ve ever made in your life.” Sarah is standing in the corner with her back to the students–three Indian guys, including one in a turban, three Chinese guys, and one Cambodian. The students have to cross the room, walking as an alpha male walks, and then place their hands on her shoulder–firmly but gently–and turn her around. Big smile. Bigger than you’ve ever smiled before. Raise your glass in a toast. Make eye contact and hold it. Speak loudly and clearly. Take up space without apology. This is what an alpha male does.

Before each student crosses the floor of that bare white cubicle in midtown, Tran asks him a question. “What is good in life?” Tran shouts.

The student then replies, in the loudest, most emphatic voice he can muster: “To crush my enemies, see them driven before me, and to hear the lamentation of their women–in my bed!”

Is Yang right? It is hard to argue with him after the case he lays out.