We’ve had many posts here over the years about the rape in Pakistan of Mukhtaran Bibi (Mai) and her struggle to bring to justice the men who perpetrated it. This past week, justice was finally NOT served:

“I don’t have any more faith in the courts. I have put my faith in God’s judgement now. I don’t know what the legal procedure is, but my faith [in the system] is gone. 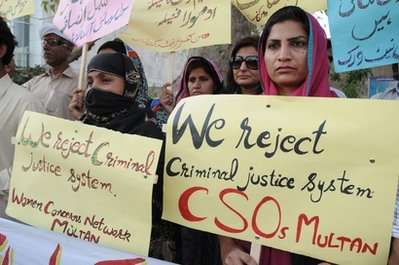 “It suggests women can be abused and even raped with impunity and those perpetrating such crimes can walk,” he told the BBC. [link]

p>Her attorney is going to appeal for a “review” but I find it difficult to hold out hope at this point. I was also surprised that you can appeal a Supreme Court decision in Pakistan:

Barrister Chaudhry Aitzaz Ahsan, counsel for Mukhtar Mai, has announced filing of a review petition against the Supreme Court verdict acquitting five men of the charge of gang-raping his client.

In a statement on Saturday, Mr Ahsan expressed his disappointment at the Supreme Court’s verdict, terming the judgment manifestly flawed and not even based on the evidence available on record.

“In drawing their conclusions, the learned judges disregarded cogent evidence and failed to notice actual material on the record and the facts proved thereby,” Mr Ahsan observed.

The former SCBA president and PPP leader further said that judges had misread evidence that they had adverted to.

“The judges have also failed to take notice of the social backdrop, which was established on the record itself, and in the context of which the horrendous crime of gang-rape was committed, reported and investigated,” he added.

Maybe somebody can explain the judicial process, or what passes for one. Amnesty International is concerned for Mai’s safety and appealing to the government to protect her.

4 thoughts on “Years later, and still no justice for Mai”