It was 1999, the movie “Sixth Sense” was packing theaters and M. Night Shyamalan 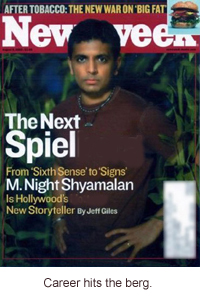 looked like a genius, a directing prodigy destined to win more Oscars than Meryl Streep and Jack Nicholson combined. He was soon dubbed “The Next Spielberg” and every moviegoer learned to pronounce his name — or at least gave it a game try: “M. Night Shy May Lawn.”

A movie trailer trumpeting his name — “FROM THE MIND OF M. NIGHT SHYAMALAN” — would keep you from running to the bathroom during a Monday Night Football timeout, never mind that you’d just downed five Budweisers. You’d sit there and try to imagine what suspense and intrigue the mastermind had conjured this time — and how soon Spielberg would make his concession speech.

Then came a string of movies that caused critics to groan and audiences to moan. His last offering, “The Last Airbender,” was the last straw for many fans. It virtually swept the Golden Raspberry Awards, winning five Razzies, including “Worst Director” and “Worst Picture.” Roger Ebert gave the movie half a star and called it “an agonizing experience in every category I can think of and others still waiting to be invented.” Malayalis conceded that he’s a Tamil. Tamils insisted that he’s a Malayali. And Philly Grrl said, “You’re both right.”

But fans of his early movies didn’t give up. They came up with a brilliant idea: sending Shyamalan back to film school.

According to PopEater, author/copywriter Chris Baker and his two pals are trying to raise $150,000 to help Shyamalan become a better filmmaker. Baker got the idea when he saw a trailer for “Devil” last year and the audience laughed at the phrase “From the mind of M. Night Shyamalan.”

After learning that Shyamalan was planning to make the futuristic thriller “1000 A.E.” with Will and Jaden Smith, Baker and his buddies launched M. Night School, a website where fellow concerned fans can donate funds to help the writer/director finesse his craft. “If we all donate just one dollar, we can send M. Night back to NYU so he gets the help we all so desperately need,” reads the site, which has raised approximately $540 thus far. [Link]

It sounds like a good plan, but will it really work? Can Shymalan reclaim his genius tag through some remedial study? Or does he need to do something more drastic, like shaving his head and wearing an earring? Or perhaps giving up scriptwriting and focusing on directing? Or giving up both and going to medical school?

Whatever happens, I’m rooting for him. I want to see him shift his career out of reverse and cruise up the mountain again. I want to see him nominated for an Oscar again. And most of all, I want to turn to my Malayali friends and say, “HE’S TAMIL, DAMMIT!”