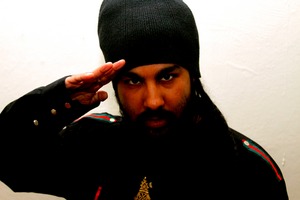 He has dreadlocks. He’s a Rasta. He just came back from recording in Jamaica. He comes straight outta Oakland with a home base in So Cal. And he’s got Sri Lankan blood pumping through his veins. I’ve interviewed Ras Ceylon before here at Sepia Mutiny, and lucky for you, Ras Ceylon just dropped a mixtape street album last week. Titled Gideon.Force Vol.1 (named after Haile Selassie’s Ethiopian army), the album is fantastic anthology of Ras Ceylon’s musical work over the past few years.

Drawing on his Sri Lankan roots and Rastafarian faith, Ras Ceylon brings a unique sound intertwining a revolutionary message with head nodding beats. Gideon.Force Vol.1 is a mixtape, compiling collaborations with various emcees and producers from Oakland to L.A. to New York to Jamaica. The album features major artists such as Munga Honorable (Jamaica), Shabaam Sahdeeq (NYC), Norris Man (Jamaica) and includes original remixes of collaborations with stic.man of Dead Prez and Tragedy Khadafi (NYC). True to mixtape nature, laced throughout the album are clips of Davey D. of Hard Knock Radio interviewing Ras Ceylon about his journey.[rasceylonblog]

Today’s #MusicMonday is the whole album – but if you have to make me choose one song off of this mixtape, it’d have to be The ?. Though you can order a pressed copy of his album online at Ras Ceylon’s website, if you go to his bandcamp you can download the entire album right now for “Pay What You Want.” Listen to it all below, but feel free to be generous and download the whole ting.

His tracks show a clear connection to his musical inspirations – Public Enemy and Bob Marley. The track 4 Aiyana Jones hits the listener hard as a revolutionary anthem with lyrics on the epidemic of senseless police brutality while his first single Aluta Continua (Struggle Goes On) has a strong island feel and dancehall undertones. Whether head bouncing beats to spreading the message of substance abuse with the song The Question or the spiritually produced song Jah Livez spreading the message of God living in the hearts of all, Ras Ceylon’s lyrics calls for repeat listens. [rasceylonblog] Here in Oakland where the crime against Oscar Grant is still fresh, the song 4 Aiyana Jones has turned somewhat anthemic. Ras Ceylon is an activist through and through – and though he may make his music, he does his part to make sure he’s on the frontline mentoring local at-risk youth and speaking out in issues like police brutality or education access that affect youth in Oakland. Peep the video below – you just may learn something. 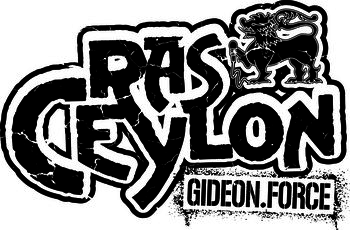