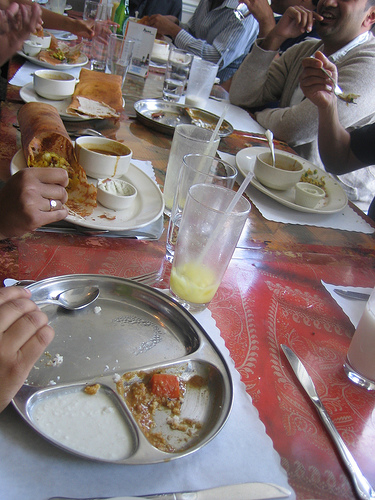 This weekend, I will be speaking at the SAAN conference which is going down at Abhi’s alma mater, the University of Maize and Blue; since our Sugi lives in Ann Arbor, it seemed apposite to host a raging party while I’m there, and by raging party we mean eating Masala Dosa, Idli and Vada until we have to be rolled, still ghee-covered and burping happily, out of a restaurant.

I’m still not over the loss of my beloved Amma Vegetarian in Georgetown– side eye to the person who closed it– and worse than that, it’s been ages since I had a nice dosa. The thought of proper Southie food makes me giddy, so when I think of how I’ll get to nom some of that AND squeal at Sugi AND potentially meet some of our loyal Midwestern readers, lurkers and trolls…well, I feel faint from such excitement. Remember: all are welcome at meetups. Even if you’ve never commented before, feel free to stop by– Sugi and I would love to meet you!

I’ve heard great things about Madras Masala; not only is the food supposed to be good (It’s auntie-tested, uncle-approved), it’s well-located, which is helpful since neither Sugi nor I have cars. Let’s meet there at 6pm on Saturday— which is after the SAAN conference. I’ve been warned that they may not have enough space, so if you could let us know in the comments if you’re going to join us, that would be a great help.