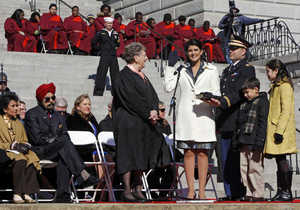 Two girls in matching pink striped hats showed up for the inauguration, and lined up afterwards with other young and bundled-up people to meet the charismatic new governor in person. Parents held their blanketed daughters up in the bitter cold to see and hear this moment. Maybe they wanted their children to see what was possible, to feel that they could dream big and really achieve their dreams too. Those kind of dreams were cut short for the youngest victim of the Tucson shooting, nine-year-old Christina Taylor Green, a student council member with a budding interest in politics who was attending a local “Congress on Your Corner” event organized by Arizona Congresswoman Giffords the day she, Giffords and several others in attendance were suddenly shot.

You may have read about Green or heard the President speak about her at the Tucson memorial service, which also took place last Wednesday. With her loss still fresh on my mind, the otherwise ordinary actions of parents taking children to see a historic swearing in felt like moving acts of courage and hope. Haley’s own parents were nearby as she took her oath of office, and in her inaugural speech the nation’s youngest governor (age 38) described how her mom had inspired her own dreams when she was growing up.

You see, my mother was offered one of the first female judgeships in her native country, but was unable to serve on the bench because of the challenges of being a woman in India. Now she sits here today watching her daughter become Governor of South Carolina, the state she proudly calls her home. When you grow up with a mom like that, the word “can’t” is not in your vocabulary.


I will always be the proud daughter of immigrants. I will always cherish our family’s experience. And I will always strive in my actions and in my words to make South Carolina a place where all of our children, regardless of race or gender, know that unlimited opportunities for happiness and success await them.

77 thoughts on “‘I, Nikki Randhawa Haley’: An Inaugural Moment”