For months we have been highlighting the campaigns of South Asian American candidates. Now it’s “go” time. Get out there today and please encourage others you know to vote as well. It is precisely elections like these where the things you voted for in presidential elections are rolled back. If you felt voting in 2008 was important than this election is no different.

This past August, the Republican nominee for Kansas’ Fourth Congressional District Mike Pompeo — who owes much of his personal wealth and political career to the right-wing billionaire Koch brothers — tweeted out an article referring to his Indian-American Democratic opponent Raj Goyle (a former Center for American Progress staffer) as an “evil” “turban topper,” calling it a “good read.” Shortly after the tweet, the campaign released a full apology, calling it an “honest mistake.”

Now, the campaign has once again returned to racial waters. Pompeo supporter John Eck, who runs an insurance agency in the district, placed two digital billboards above the building that houses his company. The first features an image of Pompeo along with the phrase, “True Americans Vote For Pompeo.” The second billboard says, “Vote American. Vote Pompeo.” [link] 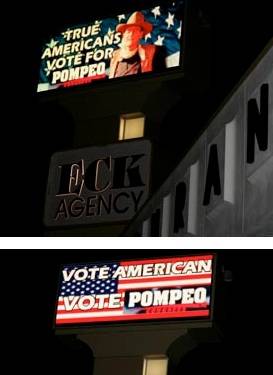 If you have any stories from the polling places today please email or tweet us.