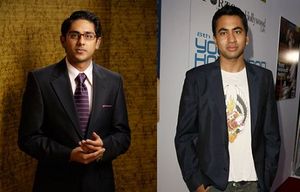 Actor Adhir Kalyan was on The Late Late Show with Craig Ferguson and shared a story of being mistaken for Kal Penn when he was visiting a beach in California. I don’t feel there’s too much similarity in their looks, and they sound completely different because Kalyan has a British accent. But hey, I know being mistaken for another desi happens from time to time, even to us non-celebrities who aren’t getting screen time during prime time or in theaters across America.

Example #1: At one summer job, I was one of four interns in a small office with less than ten staff members. Occasionally, throughout the summer the Executive Director and one or two other staff members would call me Ritu, the name of another intern. She was desi, had straight hair (of a different length) and wore glasses like me, but that’s where the similarities ended.

I don’t mean to make this experience sound horrible–to me it was something awkward that made me think a little bit about personal identity. I corrected the people who called me by the wrong name each time, but I also remember wondering if in their minds my comments at staff meetings, actions at work, etc., were being attributed to me or the other intern.

Were my achievements my own? Were her errors or mishaps mine as well, if only in their minds? (Perhaps that last question was on her mind as well!)

Example #2: At school I was one of two desis in a particular class. This time the setting was larger with a classroom of about twenty students, mostly women, and the other desi, Ana, was about as opposite of me in terms of features like height, size, hair, as you could get.

When we raised our hands to ask a question or comment the professor would call on us, and after I got called Ana a couple of times I started thinking of how the professor perceived me. Was I a desi/brown person first and foremost in her mind? Is that why I was being called by the other student’s name? And, perhaps more pressing at the time

, was this going to affect my class participation grade, if she ended up remembering me as Ana chiming in during class discussions?

Neither of these examples involved desi professors or bosses–I can’t recall other desis confusing my name that way besides my parents, and having them call me by my sister’s name has never prompted any existential musings!

Have you had a similar experience? How did you handle it, and how did you feel about it?

If you’re interested in how Kalyan handled the situation when someone thought he was Kal Penn, you can watch the part of the interview that’s about 2 minutes 20 seconds in. Clearly he didn’t let it faze him, or if it did he at least parlayed it into a nice joke for late night anyway. The actor currently stars in a sitcom called Rules of Engagement with David Spade, playing Timmy, a variation on a role that Spade made memorable in Just Shoot Me–an overly put-upon personal assistant who trades witty, caustic barbs with his boss.

67 thoughts on “Musings on Mistaken Identity”