The Commonwealth Games in Delhi are finally here, and just in case you’ve been hiding under a rock, here’s an A to Z guide to get you up to speed:

A is for Abhinav. India’s first and only individual Olympic gold medalist, Abhinav Bindra may shoot himself to a fifth Commonwealth Games medal and a thousand more marriage proposals.

B is for Bolt. The Jamaican sprinter named Bolt is missing from the Games, but as a safety inspector at a new bridge in Delhi said, “We’re more concerned about any other missing bolts.”

C is for Clean Up. No, not what’s been happening at the athletes’ village in Delhi, but what Indian athletes hope to do on the medal table.

D is for Delays. The Games have been plagued with delays: delayed funding, delayed construction and even delayed corruption.

E is for Efficiency. It was expected to be part of the Games, but like a number of foreign athletes, it didn’t quite make the trip to Delhi.

F is for Frightened. Some athletes abruptly pulled out of the Games, frightened about what they might experience in Delhi, everything from collapsing bridges to mosquito-borne diseases to hugs from Suresh Kalmadi.

G is for gold. India has won 102 gold medals in the history of the Commonwealth Games, almost as much gold as South Indian actress Rambha wore on her wedding day.

H is for Home Field Advantage. That’s what Indian athletes will enjoy in Delhi: cheering crowds, familiar surroundings and, of course, hugs from Suresh Kalmadi.

I is for Inspire. The Games will bring glory to hundreds of athletes and may inspire the next generation to take up a sport that’s not played with a joystick.

J is for Jung. Shooter Samresh Jung won four medals at the 2002 Games and seven more in 2006, so don’t be surprised if you see a note on a gold medal that says “To be hung on Jung.”

K is for Kalmadi. Chairman of the Organising Committee, Suresh Kalmadi brought the Games to Delhi and was showered with compliments, then people wanted to beat him with implements. 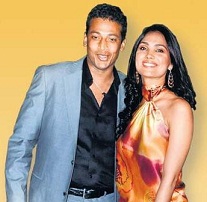 L is for Lara. Tennis doubles ace Mahesh Bhupathi may give spectators a reason to smile, especially if he brings his real partner, Lara Dutta, along.

M is for Money. The price tag of the Games keeps rising — at this rate, it would be cheaper to produce another Rajinikanth film.

N is for Nehwal. Ranked No. 2 in the world, Saina Nehwal is a gold medal favourite in badminton, so quick on her feet that the Games Committee almost scheduled her singles and doubles matches simultaneously.

P is for Pep. The Organising Committee wanted A. R. Rahman to put more pep into his theme song “Oh yaaro, yeh India bula liya”, but there’s only so  much pep that Rs. 5.5 crore can buy.

Q is for Queen’s Baton. On its way to Delhi, the baton traveled through the 71 nations of the former British Empire, where many people were thankful that, unlike some of their forebears, they were carrying, not getting clubbed by, the Queen’s baton.

R is for Rugby 7s. As hosts, the Indian team qualified for rugby 7s for the very first time, giving them a great opportunity to watch the Kiwis running with the ball. 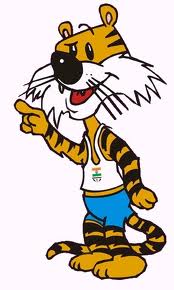 S is for Shera, the mascot of the Games, whose popularity has soared so high that, according to some experts, there hasn’t been this much “tiger mania” in the world since the 1997 Masters.

T is for Tejaswini. Recently crowned world champion in the 50m Rifle Prone event, you can bet that Tejaswini Sawant won’t take losing lying down.

U is for Underdog. Indian athletes will be underdogs in a number of events, but don’t be surprised if they win medals in swimming and gymnastics, especially if Varun, the front desk guy, forgets to give the British team their “wake up” call.

V is for Vijender. A bronze medalist in boxing at the Beijing Olympics, Vijender Singh is determined to prove that Indians can dish out more than just butter chicken.

W is for Wrestling. It’s a big part of the Commonwealth Games and if you don’t believe me, just ask Kalmadi about all the problems he’s been wrestling with.

X is for Xhosa. It’s a language spoken in South Africa, and you can bet that at least one athlete will try to use Xhosa to order a dosa.

Y is for Yamuna River. The athletes’ village has been built along the bank of the Yamuna, triggering fears that the mosquitoes breeding in the river have been trained to attack Aussies and Britons.

Z is for Zany. The controversies and delays that have plagued the Games are certainly zany, but not quite as zany as the western news anchors who got a big thrill whenever they had an opportunity to say “Sheila Dikshit.”