The blogosphere has been buzzing this week over a…Flickr set with ten year old information. And with good reason. Eric Fisher’s use of ten year old census data helps us visualize the segregation we already know exists in our major cities:

[Eric Fisher's] taken a look at the way that the residents of major American cities assort themselves. Inspired by Bill Rankin’s map of Chicago’s racial and ethnic divides, he took census data from the year 2000 to see how other cities stacked up in terms of how citizens identify themselves and where they live.

Each dot in the plot above represents 25 people. The red-green colorblind among you may see a nearly monochrome map since those two colors represent self-identified whites and Asians. The cluster of blue dots … represent African-Americans. In and of themselves, the findings are hardly shocking, but since it’s Flickr, the map has already become interactive as users chime in with notes and comments to explain the city’s patterns. Even if you aren’t a sucker for information graphics, there’s something interesting in comparing and contrasting our city with the others in the photoset. [Link]

p>Here is the map of my area in Los Angeles. I make up the green right where the Red, Blue, and Orange intersect on the westside: 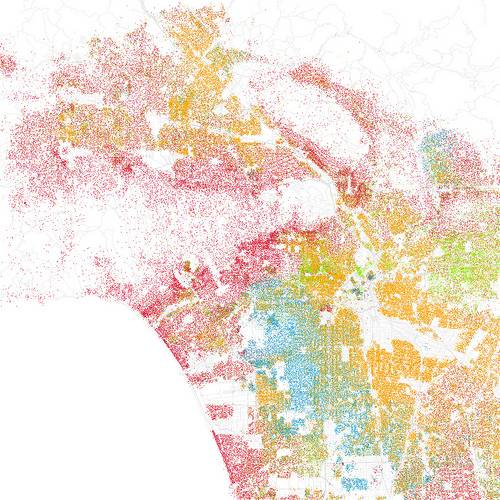 Use the search bar on Eric’s page to look for your city. I thought the picture of DC showed one of the clearest divides. Can’t wait to see how the demographics change when he uses 2010 data.

9 thoughts on “Greenspotting: Race and Ethnicity maps of the U.S.”