DVR’d Outsourced and watched it this afternoon and…. I guess I mostly agree with the New York Times. The show wasn’t as bad as it could have been. 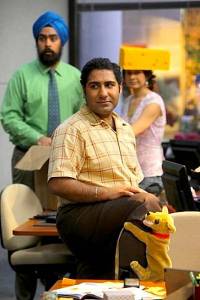 I was certainly expecting a much less flattering portrayal of desis, crude jokes about accents, and the like. Instead, most of the show was a traditional fish-out-of-water comedy with the joke often on the opey white guy.

The variety of supporting cast sorta intrinsicly ensure that desi portrayals aren’t unidimensional and at least a couple of the characters have room to emerge with some sophistication. Todd, the lead, has got potential white and desi love interests, a back stabbing nemesis, a project, and a budding protégé.

My main problem with the show….it just wasn’t that funny. Todd’s the most developed character and most of his jokes are just too cliché to really hit. The writers appear so eager to avoid simplistic desi characters that they make Todd the simplistic “fresh from Kansas” character instead (does he really expect everyone on the planet to understand a Packer Cheesehead?)

Still, you can see how it takes the Office formula, shakes it up a bit, and tries to create something new. But while so much of the Office is about capturing character nuance (we’ve all worked with or known someone like Dwight), it’s tough to do the same with comparatively alien characters. At least in an initial, 30 minute episode. So, I plan on DVR’ing the upcoming episodes and giving the show a chance to dig out of the laughter deficit it’s currently in.

Miss the episode? Well you can watch it all online here -