SM tipster Amol notifies us of some sad news today out of the UK:

An Indian pilot who flew Hawker Hurricanes during World War II has died, it has been announced.

Sqn Ldr Pujji was believed to be the last surviving fighter pilot from a group of 24 Indians who arrived in Britain in 1940.

He survived several crashes and was awarded the Distinguished Flying Cross for services in Burma. [Google]

The photograph in the article conveys the swagger of a pilot who knows he’s a bad-ass. 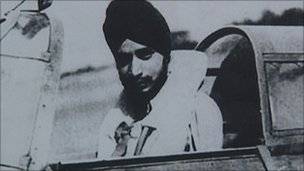 He seems to have given an interview earlier this year:

Mohinder Singh remembers the start of the war vividly. Just a year after it had begun, at the height of the Battle of Britain, he decided to join the Royal Air Force (RAF). He was 22 years old and in search of adventure.

‘I saw London being bombed, I saw what people were suffering and I knew what they were going through and how cruel the enemy was because they were throwing bombs on civilians. They were not fighting soldier to soldier and hundreds of people were being made homeless so that changed my perspective, then I was very keen to fight for the country, for this country where I had come to seek adventure really.’

Two or three pilots would be lost everyday and Mohinder almost became a casualty himself several times.‘From day one in every letter to my parents I said don’t expect me back.’ [Link]

Here is a newer picture from an article in The Guardian last year that detailed a permanent exhibit at the RAF museum (that I once visited as a kid) called “Diversity in the Royal Air Force”: 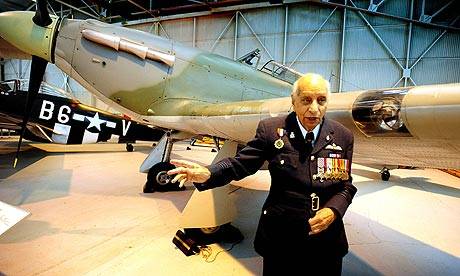 I will likely re-visit this whole topic in greater detail at some point in the future.