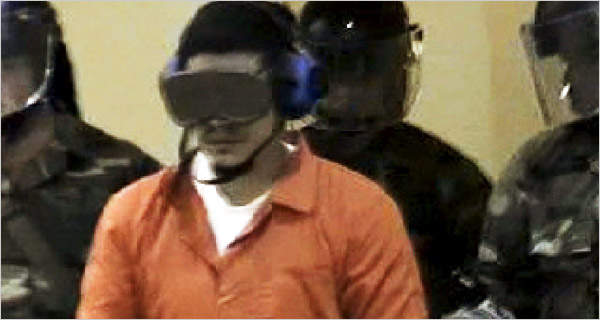 [Amitava Kumar and Lorraine Adams will be in conversation today, August 27, at 6.30 PM at the Aicon Gallery in New York City. Admission is free.]

I have just received a letter from a man in prison. His name is Hemant Lakhani. Lakhani was a women’s clothing salesman who, in 2005, was convicted of selling an Igla missile to an FBI informant posing as a member of a jihadist organization.

Lakhani is one of the people I write about in my new book A Foreigner Carrying in the Crook of His Arm A Tiny Bomb. He learned about the book’s publication by reading a review in the New York Times.

Mr. Lakhani writes to congratulate me but also to invite me back. There is more to tell, he writes. If I listen to his story, and write about it, he promises me that the book will be a bestseller. I will be interviewed by the mainstream press, including Charlie Ross (sic).

The Times review had also mentioned that I had visited a strip-club outside the Missouri high-security prison where Lakhani is incarcerated. I had a conversation there with a dancer about the man I had come to meet in Missouri. This didn’t sit well with Mr Lakhani and he writes in his letter that I must promise him that I will not go back to the strip-club again. Actually, in my opinion, Mr Lakhani is neither very moral nor very smart. But like his lawyer I’m very convinced that his client would not have made a good arms smuggler. No real terrorist would have come to him. There is little chance that he would have acquired a missile unless the FBI had arranged for one to be given to him.

Mr Lakhani is 75 years old and in poor health. It is very likely that he will die in prison. His letter to me is a sad document, and I apprehend its appeal, but I’m unwilling to engage it any further. It is true that I’m critical of the US government’s war on terror, and its futile and expensive engagement with minor characters like Mr. Lakhani. But that doesn’t mean that I’m also willing to pack up my bags any time soon and leave for Missouri.

But mine is hardly the only way to write about the war on terror.

Lorraine Adams is an American writer who was awarded a Pulitzer for work in journalism. But she quit her job as an investigative reporter for the Washington Post to write a prize-winning debut novel, Harbor. The novel tells the story of Aziz Arkoun, a 24-year-old Algerian stowaway who surfaces in the waters of Boston harbor.

Aziz was based on a real-life character, an Algerian man named Aziz Ouali, a 26-year-old East Boston dishwasher. He too had been a stowaway. After spending 52 days in the hold, he had swum ashore. This was in the late nineties. An Algerian man named Ahmed Ressam tried to cross into the US, near Seattle, with the trunk of his rental car packed with explosives. Soon, the government carried out a massive sweep, detaining Algerians across the board. Ressam was carrying a cellphone number that led the police to another Algerian man who was a room-mate of Aziz Ouali’s. They were all arrested.

In Adams’s treatment of her character, there is a great deal of sympathy. Aziz Arkoun has a rich past; like Ouali, he is a refugee from political violence. But, in what is certainly more a feature of fiction, Adams endows her protagonist with a fine and sensitive interior life. He is sentient in a way that earns the reader’s respect.

A few months ago, Adams wrote about the fate of Aziz Ouali. He was in prison, awaiting deportation. Ouali is a flawed character, of course, and Adams’s attention to this ambiguity is a part of the persuasiveness of her plea. In fact, the many pitfalls in his life, some of his own doing, make for heartbreaking reading.

In doing what she is doing, Adams has produced fiction that stands in opposition to the Manichean fictions of the post-9/11 state. In Mao II, Don DeLillo had famously written: “I used to think it was possible for an artist to alter the inner life of the culture. Now bomb-makers and gunmen have taken that territory.” But people like to repeat this quote without in any way elaborating on the fact that the surveillance state has been most successful at governing our social spaces and our individual imaginations. An Aziz Ouali knows he is alive, or he is well, or if his family is whole, if he can see the outline of his face on a tiny piece of plastic called a green card.

The argument I am making here could be made clearer with another example. Do you remember the news-report about a videotape that showed Jose Padilla, jailed in solitary confinement for three and a half years, being taken out to a dentist? Padilla, jailed on suspicion of plotting a dirty-bomb attack, had been in his cell in the army brig in Charleston, South Carolina. In the report, his lawyers said that the video-tape showed that the torture, including solitary confinement, which their client has undergone at the hands of the military, has left him so psychologically damaged that he could not stand trial. In fact, Padilla’s lawyers had a difficult time persuading him that they were on his side.

In an article in Artforum, critic Graham Bader had this to say about Padilla: “In the videotape documenting one short episode of his military detention, he is shown on his way to a root canal down the hall from his cell, wearing blackout goggles and noise-blocking headphones, thereby prevented from experiencing even briefly anything outside himself, outside his merest existence as bare life, wholly at the whim of the state.” The video is testimony to “the state’s role in authoring the most basic experiences of life and death.”

The state is the real author, not Adams, not I. The state produces our stories and handcuffs them to our selves. We can reach out for other stories, but it is difficult. Adams has written that Ouali didn’t have enough English to read Harbor. His wife, an American woman from Boston, never told him about it. She said it was too painful.

Amitava Kumar and Lorraine Adams will be in conversation today, August 27, at 6.30 PM at the Aicon Gallery in New York City. Admission is free.

13 thoughts on “Talking About Terror”