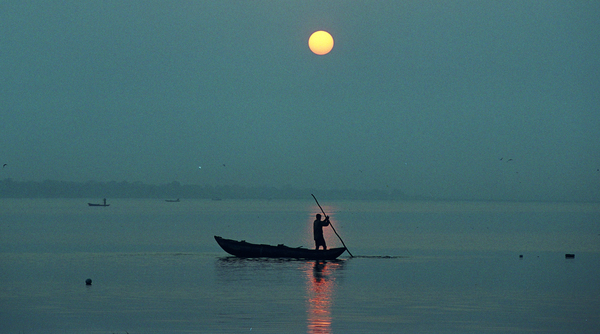 This may look like it’s from a picture postcard, but it was a surprise for me to see a lone fisherman in the Jaffna lagoon where fishing had been totally banned during most of the past two decades. The ceasefire, despite its problems, had added a ray of hope for many people of the Northern & Eastern provinces of Sri Lanka.

This is the episode in which we are on Staten Island! Because a friend recently tipped me off to this:

War & Peace in Sri Lanka Photos by Sri Walpola (Click for the show’s official description. Thanks, Deepti! if you scroll to the end of the post, you’ll see two ways to see much of the rest of the show too. EDITOR’S NOTE/UPDATED 8/11: Sri Walpola and I have been trading messages, and he generously offered to send me pictures to put up here. I have interspersed them with the text that I originally posted, and included his captions.)

Unless you are already lucky enough to live on Staten Island, head to the ferry and take the boat over there. Staten Island has a substantial Sri Lankan community, and indeed, if you find your way into the St. George Library Center (not far from where the ferry docks) and a kindly library staffer thinks you look Sri Lankan and/or confused, he may not even wait for you to ask where the show is before he points you downstairs, toward the reference room. It is possible that this is the warmest reaction you will ever have to being profiled.

If it is the weekend, neighborhood residents will be reading, or perhaps checking e-mail. Comfy chairs and tables are scattered about. Card catalogs, tables. The people leafing through newspapers or working quietly on laptops will not look up to watch you scan what hovers above their heads: the photography of Sri Walpola, a former presidential photographer in Sri Lanka. His pictures of the civil war in Sri Lanka are on display here for the first time in the U.S.

The twentysome pictures on the walls range from heartbreakingly hopeful pictures of the ceasefire to devastating portraits of families separated by fences and displays of military and militant firepower. Some of the pictures are printed in a high gloss; others are matte, so that they appear almost like oils, or old movie stills. A friend describes one as especially painterly–a Jaffna fisherman standing in his boat, the blue of the background dark and pure behind him, the line between water and sky nearly seamless. 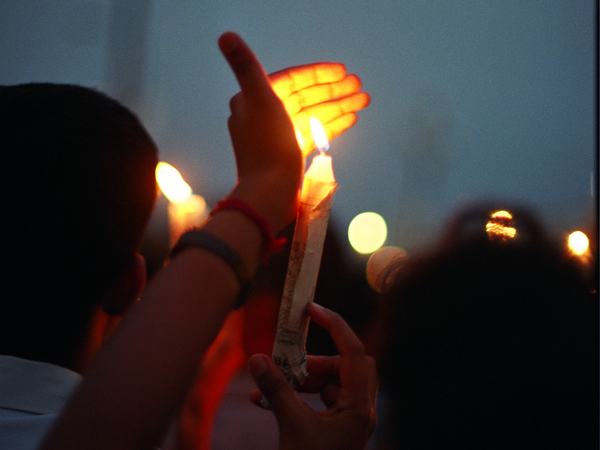 I was reminded of the obstacles to peace when I saw this man trying to protect the flame of a candle he had lit to mark the second anniversary of the ceasefire. 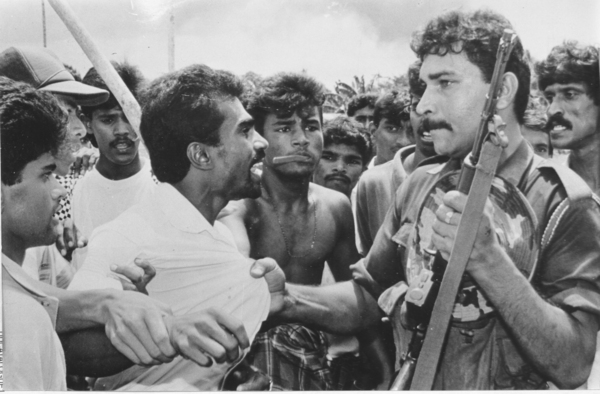 I was shocked, but lucky to be able to capture on camera a soldier ‘arresting’ a Tamil youth after the bombing of the Kolonnawa oil storage tanks in October 1995.

–Sri Walpola on “Into Custody” 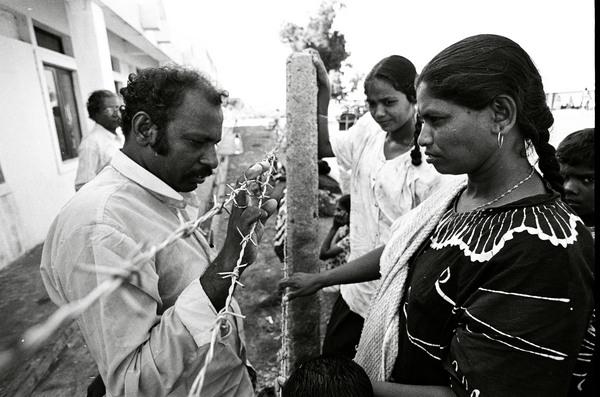 This family was separated by barbed wire that underscored the plight of internally displaced Tamil civilians who faced severe hardships in Vavuniya IDP camps at the height of fighting between troops and Tigers.

–Sri Walpola on “Across the Fence”

A female Tamil Tiger cadre buying a Valentine’s day card in another picture prompts this caption: “I was struck by the romance of this Tamil Tiger woman cadre buying a Valentine’s Day card for a loved one. Even the most hardened military fighters can have a romantic streak in them.” Another shot shows an ex-Tamil Tiger child soldier, perhaps twelve, smiling as a UNICEF executive stands near him. A third Tiger photograph depicts the ranks of Black Tigers in a rare public appearance, their faces covered by dark cloth.

On one wall, Jaffna children hang over the balcony rails at their school, waving at a chopper. “Changing times,” the caption notes. “Children wave at a helicopter bringing Prime Minister Ranil Wickremesinghe to Jaffna in 2002. Instead of waving at the helicopter, the children would have fled to underground bunkers if they heard a helicopter before the ceasefire.” And there is a picture of a library in the library: The Jaffna Public Library, burned by thugs in 1981 and reconstructed years later. Jaffna schoolchildren do their exercises before the white building, clad in white shirts and blue shorts. 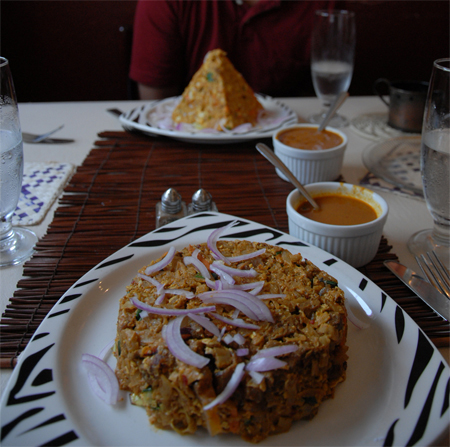 Many of the shots were taken in Sri Lanka’s northern region; in two, people (and presumably the photographer) stand perilously near unexploded shells. In another, weapons are purposefully detonated: a blast in Killinochchi makes smoke billow into the air, as the fruits of demining teams’ harvest are destroyed.

This has been a long trip already. You may feel not only contemplative, but also hungry. After you leave the show, walk a short distance to Sanrasa, and eat a plate of koththu roti, or perhaps some chicken curry and an order of four hoppers, an egg bobbling gently on top of the last one. (Thanks for the recommendation, Samip, friend of a friend and whom I have never met but who is reportedly the keeper of cool.) You may be surprised to know some of the other patrons; by the end of the meal, you will also be chatty with your waiter. Plan to take photos of the food, so you can stare at them later. Forget because you are so hungry. Later your friend will probably have one from the other time he was here. (Thanks, Vivek.)

When full, skip the bus–you need to stroll it off!–and walk a bit farther to New Asha. It will take you about a quarter of an hour, but you have to earn a second reward. When you get there, if you remembered to call ahead for your take-out, you can claim your mutton rolls (or veg!) and another order of koththu; if you forgot, dawdle in the adjacent grocery while they cook, and consider the woodapple jam. When the rolls are ready, ask for two plastic bags; if the grease soaks through, your own tote will be not-so-delicately scented for weeks. 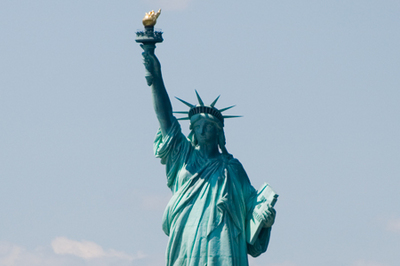 Take the ferry back whenever; it runs 24/7, just like the rest of New York. When you go home and Google “Sri Walpola,” you may realize that much of the show is on the Internet. Consider, briefly, feeling foolish. But the boat ride! The quiet, meditative space of the library as an uncanny setting for those photos! The koththu! The food hoarding! A worthwhile journey, after all.

Don’t forget to put your takeout in the freezer. And maybe donate to the NYPL. 🙂

(Second photo also by Vivek, who notes that if you take the Staten Island Ferry and then go to New Asha, you will have passed Liberty on the way to Victory. Yes, I know. Sometimes I wonder if Sri Lankan cuisine’s lack of cheese pains him.)