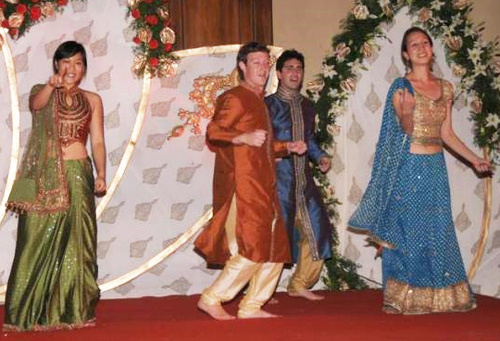 Facebook founder and CEO Mark Zuckerberg took a break from rewriting his company’s privacy policy last winter to attend the wedding of two of his employees in India. Facebook’s Principal Project Manager Ruchi Sanghvi and Director of Engineering Aditya Agarwal were married in January.

Fast Company reported these details about the ceremony back in February:

…Zuckerberg and more than a dozen past-and-present Facebook indispensables — including now-departed cofounders Adam D’Angelo and Dustin Moskovitz — trekked to a beach in Goa, India, for a week-long family celebration. Everyone dressed in costumed splendor; Zuckerberg looked fetching in a maroon silk sherwani. Women flashed henna tattoos. The groom arrived on horseback.

The photo above was one of five pictures from the wedding that were recently submitted to a photo contest on the Indian IT news site Techgoss. Receiving the photos was a big coup for the site, as they had unsuccessfully tried to photograph Zuckerberg both while he was in India for the wedding and during his 2008 trip to the country.

Of course, the first thing I thought when I saw this photo was that it was the perfect entry for a caption contest. So have at it, Mutineers. Leave your wittiest and most creative captions below.

25 thoughts on “Caption Contest: Mark Zuckerberg parties it up, desi-style”