(Nilanjana’s Rule #23 of Indian Film Plots: As if you have never seen any other Indian films that feature an Air Force Pilot as a [major](http://en.wikipedia.org/wiki/Silsila_(film) character, it rarely bodes well.)

“Roop Tera Mastana” is the steamiest song sequence I know, and I can only imagine how audiences reacted to it in 1969. The torrent of passion in Anand Bakshi’s lyrics only heightens the drama of the downpour outside, and Kishore Kumar’s hushed, enticing vocals were so popular that this song may have singlehandedly killed his acting career. Although Aradhana‘s soundtrack is officially credited to Sachin Dev Burman, the bass guitar, surging accordion, and sultry saxophone suggest that his son R.D. Burman may have had a stronger hand in this song.

Once you hear the saxophone solo that starts at 00:39, you don’t need to watch the next scene to know exactly how this drama will unfold.

Three days ago, the man behind that saxophone, Manohari Singh, passed away at the age of 79. His distinctive sound was one of the many crucial elements that defined R.D. Burman’s modern style in the 1960s and 1970s. One doesn’t have to look much further than “The Greatest Story Ever Told.” Watch out for the sax solo at 1:33 here, while you watch Helen do what only Helen can do… 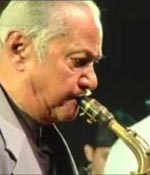 Manohari Singh began his career in Kolkata (then Calcutta) as a clarinetist, and also occasionally played the mandolin and flute in jazz bands in nightclubs as well as the Calcutta Symphony Orchestra.

When he arrived in Bombay, in the late 1950s, the Hindi film world was uniquely prepared for him. “The most famous sax player was Ram Singh, and after he died, people simply stopped using the alto sax,” Lord says. “For six or seven years, there was a gap, because nobody was good enough. After that, Manohari filled the gap.” But Singh also caught Bollywood on a cusp. “Before him, the trumpet and saxophone would be used in a very muted manner–feeble but still beautiful,” says Manohar Iyer, who runs a music troupe in Mumbai called Keep Alive, and who first met Singh in the early 1990s. “Then the trend began to change. There were more solos. This is when Manohari-ji came in” (Livemint).

Some (but not all!) of us are quick to name our favorite film song composers and playback singers, but few if any of us stop to remember the incredible individual musicians like Manohari Singh who make great film songs what they are. Last year I came to understand much more about these musicians and their role in the film music industry overall after reading Gregory Booth’s recent book Behind the Curtain: Making Music in Mumbai’s film studios. Booth starts by revealing who the real Anthony Gonsalves was, and no, it wasn’t Amitabh Bachchan popping out of a giant Easter Egg. Booth’s book explores the pre-digital era of Indian film music from the late 1940s through the early 1990s, and it’s a must-read if you’re even vaguely interested in Indian film music.

Even if you’re not an old-school film song fan, you may have heard Manohari Singh’s sax in more recent films like Chalte Chalte and Veer-Zaara. Shortly before he died, Singh appeared with Asha Bhosle on an Indian Idol 5 show devoted to R.D. Burman. He was still playing as strong as ever.

26 thoughts on “Saxophones and Seduction”