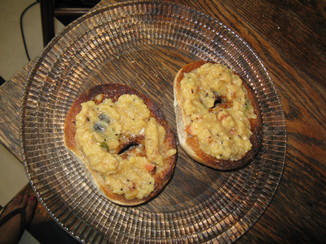 Some old friends of mine were recently in town and came over to make dinner. N, whose family is from Andhra, does lots of cooking stuff differently from me, and it was fascinating to hear her talk about it. We (okay, she; the other two of us mostly chopped and helpfully tasted) made three dishes. One: a South Indian-style daal with veggies in it. (I’ve long plopped frozen spinach in my paruppu, but tomatoes for some reason never occurred to me.) Two: chana with mushrooms from a recipe that we found on the Interwebs… And three: the piece de meat resistance, lamb curry.

We ate and drank and made merry and curry. It was fun, and I learned a lot from watching N. She has a deft hand with spices, and the curry aged well, too. So well, in fact, that I was moved to try some experiments. A few mornings later, I was eating breakfast, and I was looking at my hot buttered challah toast (from the criminally delicious Zingerman‘s). It looked lonely and sad and curry-less, and I thought, you know what would go really well with that? The gravy from the lamb curry, thickened from having been in the fridge. Curry and toast is old hat for some people, but this time, because I was too lazy to heat it up, the lamb kulambu was almost the consistency of jam.

I’ve blogged here before about cooking and food and fusion dishes encountered on my travels… but the fact is, some of the most creative fusion I’ve eaten has been in my own kitchen, as the result of leftovers, laziness and not having anyone else around at that moment to exclaim “Chee!” at my idea. There is considerable serendipity (forgive me, Vivek said I just had to use that word) in sloth. Challah and curry is seriously good. The eggy crustiness of the toasted bread stands up well to cold curry, particularly thick meat gravy. It’s even better with lamb than with chicken. And now that I’ve done it once, I would eat it on purpose, not just out of desperation.

A few days later, I ate a bagel with leftover paruppu on it for lunch. (Pictured above.) It was what I had on hand. I was in a rush. And surprise: it was tasty. I told a number of people with more… conventional preferences, and they were a little grossed out. But it was delicious, filling, and even healthy. (Better than a bagel and cream cheese, at least.)

Made anything similar? Tell, so I can try it! I won’t judge, regardless of whether you spike your milk with Sriracha, put Bru in your hot chocolate, slather your laddoos with maple syrup, or put Cheerios in your spicy snack mix. Really. What can I say? Years ago, I accidentally discovered that a banana that had fallen into the shrimp curry puddle at the bottom of my pittu lunch plate was outright delicious. I’ve been improvising ever since.