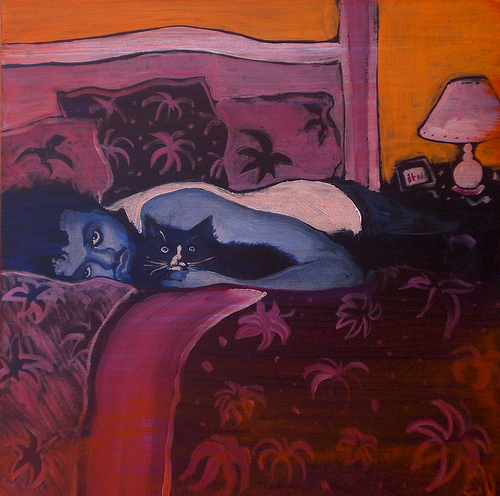 **Mohamed Mahmood Alessa was arrested with his friend (and co-conspirator) on the way to join a militant group in Somalia. His mother has said that he wanted to take his cat, Tuna Princess, with him, but she did not allow it and they argued. **

I haven’t unpacked my bags yet. Just yesterday I was in North Adams, Massachusetts, where I had driven on Thursday to attend the opening of Rasgulla, Daisy Rockwell’s art-show. (Daisy is a wonderful artist whose work I hadn’t known about till only a few months ago; I have met her since, and regard her as a close friend.) The exhibition in North Adams of Diasy’s paintings draws upon the idea of what Sanskrit aestheticians called “rasas,” the nine perfected moods, distillations of human emotions into a pure form. An important part of the exhibition is Daisy’s exploration of “political rasas,” her attempt to take fleeting news-images of public figures and turn them into physical objects. You see the painting of the Ayatollah in a purple forest; Barack Obama as a boy, standing on the tarmac with his father’s arms around him; Sarah Palin, wearing red shoes, sitting on a sofa, surrounded by dead animals. For me, the greatest interest lay in Daisy’s paintings of those accused of terrorist acts. I have long held that many of the writers and artists working in the aftermath of 9/11 have presented a faux familiarity with the so-called terrorist mind. Daisy’s art makes no such claims. It returns us to what is real–and therefore surprising–about human lives. She has painted portraits of Osama bin Laden and Mullah Omar, and there must be some bravery involved in putting these up on the walls of a gallery, but what Daisy is especially good at is painting those one would call ordinary terrorists. These are people who might be behind bars but in the paintings emerge as individuals, as individuals who are neither particularly heroic nor particularly villainous. This isn’t what DeLillo was writing about in a story that invoked Gerhard Richter–this isn’t about a viewer seeing that even terrorists can be forgiven. There is too much irony in Daisy’s paintings, and often, also glitter. There is ambiguity, perhaps, and more than that, a plain sense of attention. It is as if in an effort to find more about the world in which we are living, a world where the war on terror is a fact, the artist has finally found a human face.

But the state lacks all subtlety. Earlier this evening, I read that a six-year-old girl from Ohio, Alyssa Thomas, has been put on a “no-fly” list. Her father, Santhosh Thomas, a doctor, has readily admitted that Alyssa has probably been mean to her sister in the past. And added, “She may have threatened her sister, but I don’t think that constitutes Homeland Security triggers.” I think Daisy should paint the portrait of this little terrorist.