This Sunday marks the 41st Anniversary of the Gay Pride March in NYC. With rainbow flags waving, the streets of NYC will be covered with people taking it to the streets. And unlike the 2009 Indian Independence Day parade in NYC where queer desi activist groups like SALGA where denied from partaking, Desis this weekend will be marching.The SALGA float will have Bollywood music, of course.

NYC based pop cultural aficionado Rohin Guha had this to say about the duality of being queer and desi.

I’ve always been fascinated by the strange overlap between Indian and gay cultures. They’re like spurned aunts at a cousin’s wedding, each giving the other the iciest cold-shoulder. But once in a while, they might thaw enough to cast a wary side-eye to one another. And then they’ll return to ignoring each other.[thisisfyf]

Rohin goes on to write about this unlikely “fusion” via this Spice Girls video that he ended up watching with his parents as a kid.

But, when the Spice Girls–dressed in saris and salwars–stormed the stage on auto-rickshaws: Epiphany! It wasn’t an explicit epiphany, though. This performance of the Spice Girls lip-synching “Wannabe” simply made clear that my coming of age wasn’t going to be as neat as a joint effort co-written by Jhumpa Lahiri and David Sedaris might be.

[T]his is one of the earliest instances I can recall of my two identities being able to put aside their differences and play nicely. [thisisfyf] 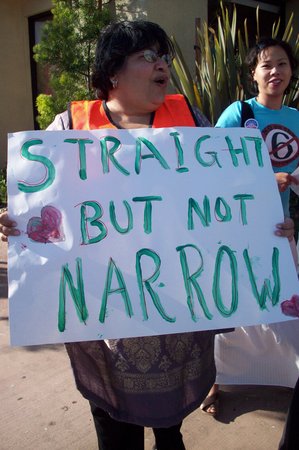 You can read his full post here, but it is kind of a precious read. His keystone moment of owning “pride” is one that I think almost all Desis raised in the U.S. can relate to. We all have that key self-defining moment where we saw an event melding together different cultural identities that somehow brought us comfort – whether the Spice Girls in saris or Kal Penn smoking a bowl.

I’ve never been to a Pride Parade but I have attended the Coming Out Day parades that South Asian Network & Satrang host here in Los Angeles’ Little India. It surprises me to no end the type of people that come out to support these marches – Aunties and Uncles and people young and old. Every year, the crowd keeps getting larger and every year the message keeps getting louder.

The Desi community is changing to be more accepting of the queer community – both here and abroad. As of 2009, in India under section 377 homosexuality is no longer illegal, Hijras are recognized legally in Pakistan, and Colombo has their own pride event. Here in the US, you have organizations like SALGA, and SATRANG advocating on behalf of the community as well as comedians like D’Lo entertaining the community while bringing light to her own struggles.

Yet… hate crimes against queer Desis continue to happen, such as what happened to Satendar Singh a couple of years ago. Organizations like SALGA are still marginalized in mainstream Indian American spaces, such as being excluded from the parade last year. Whether you are queer or a straight, this a segment of the Desi community that could still use your support. If in NYC, go check out the festivities tomorrow and if you can, be proud and bhangra the day away.