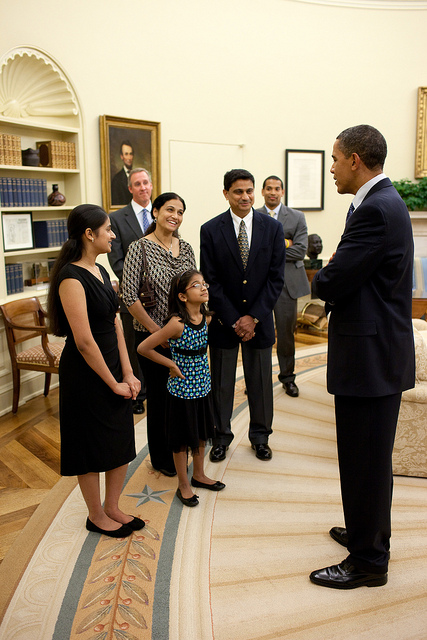 …contender-to-watch Vanya, so sassy in her blue and black frock. I can’t help it. She’s the reason why I’m writing this post. Well, that and because luminous Mutineer Nilanjana tweeted the link to this picture– and had she not made like a virtual, social-media bird, I would have never seen such a delightful image of last year’s Scripps National Spelling Bee champion, Kavya Shivashankar (on the left), meeting the President, with her family proudly beside her.Back to Vanya. Little girl is so blase about meeting the most important person in the world. Hands on her lips, nary a smile on them lips, she’s sizing him up…and I’d give almost anything to know what her verdict was.

As for Kavya, I apologize in advance for what I am about to type (because it is pointless drivel). It all hits too close for ex-spelling bee-participant (and loser!) me. That long hair (though at 14, my hair was down to my knees), that prim clasping of hands, that shy smile. Unlike Kavya and Vanya however, I was never allowed to wear black. My father thought it a terrible, inauspicious color; he also, with all the pragmatism of an engineer, dismissed any notion of it being flattering. “You have darker skin. Wear white. Looks good. Black is for white people.” Tell that to a teen secretly brooding to Sisters of Mercy and Bauhaus.

Obama spent fifteen minutes with the Shivashankars, earlier this month. Kavya had to wait a year for her Presidential prize:

“It was just so electrifying,” Kavya said afterward. “When I won the bee last year, I asked when I was going to get to meet the president. I thought it might not happen. But just two days ago, we got the call.”

The family and the president chatted about the spelling bee, which was going on at that very moment at a hotel just a few blocks away, and the importance he places on education. Then Vanya said she had a question.

“Are you going to ask me to spell something?” Obama asked.

But Vanya just wanted to ask about Bo, the president’s dog. [link]

The little girl has sass, but the Bee took a pass:

A brief cab ride through the rain took them back to the Grand Hyatt Washington hotel, the site of the bee, where they learned that Vanya — the youngest speller in this year’s competition — had not made the cut to today’s semifinals.

But no one in the family seemed downcast, least of all her.

“It was just a great experience being on the stage and spelling the words, even if you get it wrong,” she said. [link]

With an attitude like that, I have a feeling the Shivashankars will be back in the Oval Office, some year soon…

26 thoughts on “I love the littlest Shivashankar…”