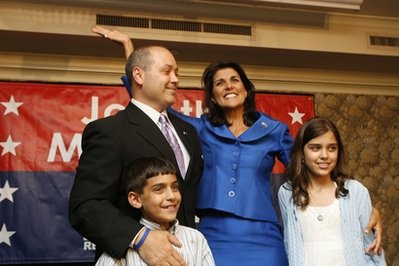 As many people may have heard, Nikki Haley came out with a commanding lead in the South Carolina governor’s primary last night (49% to 22% for the second place finisher), though she was just shy of enough votes to avoid a runoff. I thought some of the quotes in the New York Times’ article about it speak to some of the issues that Ennis raised last week:

If she wins the general election in November, Ms. Haley would be the first woman and first racial minority elected governor of South Carolina. In a speech to supporters on Tuesday night, Ms. Haley said she has challenged the status quo — but less through her age, race or gender, and more through her political views. (link)

At first that might not be so surprising, but consider this: South Carolina is 30% African American.

But in terms of her personal upbringing, Ms. Haley is without precedent for South Carolina. The state has the lowest percentage of women elected to office of any state in America. And Ms. Haley is the only Indian-American elected official in the state. (link)

While the “raghead” comment was disgusting, the fact that she’s a woman has also been a huge factor in the campaign, with two men, both political operatives, claiming to have had affairs with her.

Sometimes American politics is maddening. But sometimes a certain passion for fair play asserts itself:

“It has become a referendum on whether you think she was treated fairly,” said Danielle Vinson, the chairwoman of the political science department at Furman University in Greenville, S.C. Indeed, Sonny Hulon, 74, a retired grocery store employee who was voting at a senior citizen center in Columbia, said he had changed his support to Ms. Haley. “I voted for the lady,” he said, referring to Ms. Haley. “I was going to vote for McMaster but I didn’t like all of the junk that the other campaigns were saying about the lady.”

Allen Cuthrell, 52, an electrical engineer from Greenville, said he thinks the attacks benefitted Ms. Haley, whom he supports. “It exposed the good old boy machine,” he said. “People didn’t realize how bad it was until they saw Nikki getting attacked.” (link)

I like that: “I voted for the lady.” It’s interesting that he doesn’t say her name. And there are similar kinds of quotes in the Washington Post’s coverage.

Nikki Haley’s political views are not my own. But it is impressive that she has withstood these attacks, and even — improbably — benefited from them.