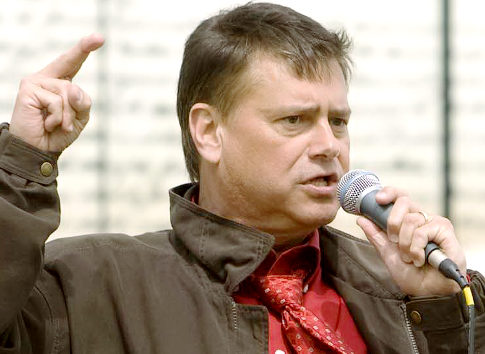 Oh, you thought there was going to be a Tea Party and nobody was going to invite The Hindus? Oh, The Hindus are INVITED. The thing is, this particular Hindu is booked with other, more rational and less racist political affiliations. I have to wash my hair that day, Tea Partiers. AND FOR THE REST OF MY LIFE, WHENEVER ANYONE LIKE YOU CALLS. Because guess what, I have lots of Muslim friends and they are awesome, and I am not going anywhere where they are not ALSO invited.

The short version is that Tea Party Express chairperson Mark Williams, who is a CNN commentator, made a comment in which he slammed Muslims for (get this) worshipping “the terrorists’ monkey god.”

According to the NY Daily News’ first story on the topic:

“A National Tea Party leader protesting a proposed mosque near Ground Zero set off a firestorm of anger Wednesday by saying that Muslims worship “the terrorists’ monkey god.”

Mark Williams, chairman of the Tea Party Express, blogged about the 13-story mosque and Islamic cultural center planned at Park Place and Broadway, calling it a monument to the 9/11 terrorists.

“The monument would consist of a Mosque for the worship of the terrorists’ monkey-god,” Williams, a frequent guest on CNN, wrote on his Web site.”

(The article on his website is now password-protected, and to get the password, you have to buy his book, which is not on GoogleBooks as far as I can tell. Possibly because Google’s slogan is “don’t be evil.”)

BUT IT GETS EVEN BETTER.

Williams APOLOGIZED. But not to, I don’t know, HUMANITY and especially Muslims, but to his “Hindu friends.” (Who ARE you, dudes? You Hindu Friends of Mark Williams? I imagine an extremely small club.) From his blog:

“I was wrong and that was offensive. I owe an apology to millions of Hindus who worship Lord Hanuman, an actual Monkey God.”

Oh, an ACTUAL Monkey God. You’re bending your opportunistic reality to accommodate an Actual Monkey God, as opposed to the one you concocted from the space in your brain where your education was supposed to go.

“Moreover, Hanuman is worshiped as a symbol of perseverance, strength and devotion. He is known as a destroyer of evil and to inspire and liberate. Those are hardly the traits of whatever the Hell (literally) it is that terrorists worship and worthy of my respect and admiration not ridicule.”

A whole bunch of folks (like the Manhattan borough president and some other political types) denounced what he said… but I don’t see any Tea Partiers doing it. (Counterexamples? Comment thread away.)

Let me just say, I for one do not accept his apology, because it is offered in a spirit that is completely antithetical to the Hindu faith and the Hindu community in which I was raised, and because it demeans Islam, a religion that is important to so many of my friends and loved ones.

Also, while we’re at it, I dislike the Tea Party for associating tea, my favorite beverage, with racism and discrimination. South Asian-American folks, let’s reclaim tea and stand in solidarity against this kind of asshattery.