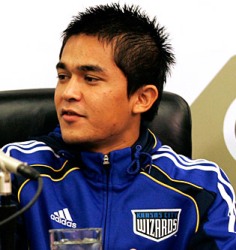 I don’t follow soccer closely anymore, so it came as a surprise to me when a friend sent me a link to an article about Sunil Chhetri, the first player from India to sign with an MLS team. What in desi-heaven’s going on here? The Pittsburgh Pirates sign Rinku Singh and Dinesh Patel, the Indianapolis Colts give John Gill a reserve spot at defensive tackle, and now 25-year-old Chhetri is making waves with the Kansas City Wizards. Someone tell the Chicago Bulls to send their scouts to India immediately. The next Jordan could be jamming and juking on a court in Jalandhar.

Sunil Chhetri was little more than a name on a list when he first popped up on Kansas City’s radar.

The Wizards, like most MLS teams, receive dozens of letters, video links and DVDs each month from players seeking a chance to play professional soccer. The Kansas City staff feels guilty about not giving everyone a chance, so they take a look.

Chhetri immediately caught their eye, even in the limited video clips they were able to obtain. Find a way to get him to the United States and we’ll give him a shot is what they told representatives from the Indian team. [Link]

So Chhetri was smuggled across the Mexican border and taken to the Wizards’ headquarters, where the receptionist was excited to see him: “I’m so glad you came. Windows 7 has been giving me fits.” Actually, he showed up at the Wizards’ training camp in Arizona and dazzled everyone with his feet. And his nose.

Blurry-fast feet. Nose for the goal. Connected with the other players on the attack almost instantly. Good instincts, able to adapt to the team’s style of play without thinking about it. Quick to get the ball ahead instead of holding it too long. Hits well with both feet, uses his entire body to strike it. Pretty good in the air at 5-foot-7.

Even better, Chhetri had a burning intensity to go with his talent.

“We learned he’s extremely competitive, has a desire to be successful and when you have that, you can get a lot out of a guy,” Wizards coach Peter Vermes said. “If someone has the talent and they don’t have the fire in the belly, so to speak, every day you’re struggling to get those guys going. This guy just gets it.” [Link]

A forward, Chhetri has made 35 appearances on India’s national team, scoring 16 goals, including a hat trick against Tajikistan in 2008 that propelled India to the Asia Cup and made Chhetri a household name in the entire former Soviet Republic.

The reaction in India to Chhetri’s move to the U.S. has been like what happened in Japan nine years ago when Ichiro Suzuki switched to Major League Baseball, just without the round-the-clock TV coverage — at least not yet.

The Wizards held the news conference for his signing at 9:30 p.m. local time so it could be broadcast in India. The team has doubled its Facebook friends to 12,000 since he joined the team, many of them posting photos of their favorite star, some saying his signing will bring more fans to MLS than David Beckham ever did.

Rob Johnson, Kansas City’s vice president of communications, has been inundated with calls from media members in India, often at 3 or 4 a.m. because of the time difference.  [Link]

Johnson: “No, not yet. … How many times do I have to tell you guys that the season hasn’t started yet?”

14 thoughts on “Sunil Chhetri, the Wizard from India”