In 2006, Siddhartha profiled Imaad Wasif, after the release of his debut album on Kill Rock Stars Records. I had sort of forgotten about the post — and not really remembered Wasif’s music — until I was in a Barnes & Noble the other day. 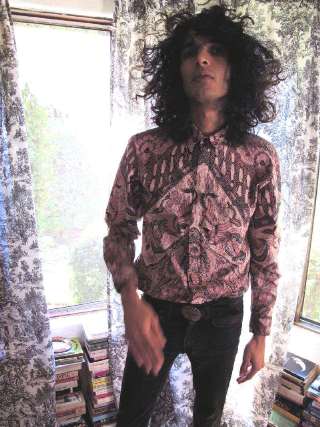 There I found, as an actual CD, Wasif’s third CD, The Voidist. (As a side-note, whenever this happens I’m reminded of how much I miss actual record stores. Music browsing on the internet just isn’t the same!) In between 2006 and now, Wasif had released a second album, Strange Hexes, and also worked with Karen O (of the Yeah Yeah Yeahs) on the soundtrack to Where the Wild Things Are.

Here is a music video from the new album, “Fangs”:

I’ve been listening to Wasif’s music all week this week, and this time I’m feeling it. (What do you think?) By comparison to the first CD, The Voidist feels more like 1970s rock ‘n’ roll, with some songs with big power chords. It’s also less confessional in tone (and less dark), and much more of a collaborative (band) effort than a solo performance. All that said, Wasif’s new CD also reflects less of an impact of classical Hindustani ragas, though I do hear some trace of them in “Redeemer” (see the somewhat mysterious official music video on YouTube. Note: Video is slightly NSFW, with artfully out of focus female nudes).

You can download an early MP3 for Wasif’s “Out in the Black”, which has a clear raga/Hindustani influence, here. It’s actually one of my favorite tracks by Wasif. Another recommended track is “Oceanic“. All of his albums can be downloaded from ITunes, including the collaborative work he’s done on films.

Imaad Wasif is touring the U.S. right now; you can see the dates on his website. He’ll be in New York, Washington, and Philadelphia (@North Star Bar) towards the end of April.