There was a terrorist attack earlier today in Austin, TX. I can’t immediately learn about this incident though if I visit the New York Times website. This (see below) is what I would see on the “National” section of their website as of 8p.m. Central, 2/18/10. The main page of the NYTimes has no prominent reference at all. It just has a single line hyperlink under the section “more news.” 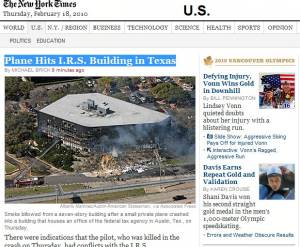 Got that? “Plane hits building.” Written as commonly as “Dog Bites Man.” Nothing to see here folks. Move along.

It wasn’t just the NYTimes though. To their credit FoxNews features the incident as the main story on their website. “Cowardly criminal,” it blares. You know, kind of like an intoxicated hit-and-run driver is a “cowardly criminal.” No terrorism here. 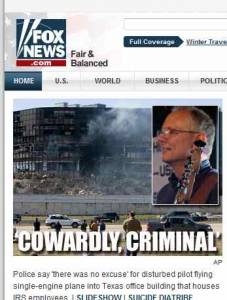 You see, the very definition of terrorism has changed, right beneath our feet. A man with strong idealogical beliefs against the government of the United States tries (and succeeds) to kill himself and take as many civilians (federal workers) as he can with him. But they don’t call it terrorism. That sacrosanct term is now reserved only for non-white people with funny sounding names. Preferably Muslim.

Here are some excerpts from 53-year-old Joseph Andrew Stack’s web-based manifesto (which came to light after this morning’s events):

We are all taught as children that without laws there would be no society, only anarchy. Sadly, starting at early ages we in this country have been brainwashed to believe that, in return for our dedication and service, our government stands for justice for all. We are further brainwashed to believe that there is freedom in this place, and that we should be ready to lay our lives down for the noble principals represented by its founding fathers. Remember? One of these was “no taxation without representation”. I have spent the total years of my adulthood unlearning that crap from only a few years of my childhood. These days anyone who really stands up for that principal is promptly labeled a “crackpot”, traitor and worse.

While very few working people would say they haven’t had their fair share of taxes (as can I), in my lifetime I can say with a great degree of certainty that there has never been a politician cast a vote on any matter with the likes of me or my interests in mind. Nor, for that matter, are they the least bit interested in me or anything I have to say.

Why is it that a handful of thugs and plunderers can commit unthinkable atrocities (and in the case of the GM executives, for scores of years) and when it’s time for their gravy train to crash under the weight of their gluttony and overwhelming stupidity, the force of the full federal government has no difficulty coming to their aid within days if not hours? Yet at the same time, the joke we call the American medical system, including the drug and insurance companies, are murdering tens of thousands of people a year and stealing from the corpses and victims they cripple, and this country’s leaders don’t see this as important as bailing out a few of their vile, rich cronies. Yet, the political “representatives” (thieves, liars, and self-serving scumbags is far more accurate) have endless time to sit around for year after year and debate the state of the “terrible health care problem”. It’s clear they see no crisis as long as the dead people don’t get in the way of their corporate profits rolling in. [Link]

Belief that the U.S. government is corrupt, committing crimes against the people, and must be punished? Check. Belief that his small act will help even the score? Check. Virgins waiting for him in the afterlife? Ok no. But come on!

My introduction to the real American nightmare starts back in the early ’80s. Unfortunately after more than 16 years of school, somewhere along the line I picked up the absurd, pompous notion that I could read and understand plain English. [Link]

p>Doesn’t he sound like he hates America? You know, kind of like terrorists who kill not only their intended victims but try to instill fear/collective punishment in the masses as well?

MR. GIBBS: All right, fire away.

Q Any more details you can tell us about the plane crash?

MR. GIBBS: No — as I said earlier, John Brennan briefed the President. We’ve gotten a number of updates on the flight from the Situation Room. The President will get regular updates as well as local and federal officials figure out what happened on the ground.

MR. GIBBS: Well, I took your question to mean an incident of foreign — terrorism from — that had threatened the homeland from somebody like an al Qaeda. As I said earlier, we don’t suspect that. I am going to wait, though, for all the situation to play out through investigation before we determine what to label it. Ben, I would say this. You have — again, I don’t want to get ahead of where we are in the investigation, but obviously — well, let me just do this. Let me wait until we get a better sense of where we are on the facts.

Q Do you think the President will address it? Does it rise to that level?

MR. GIBBS: I think some of it depends on sort of where — what we learn and where this goes. [Link]

I am ok with, and admire Gibbs wanting to wait for the facts. Boy am I going to look stupid if I have my facts wrong in this blog post. If so, I will apologize. No issue there. What freakin’ bugs the shit out of me is the highlighted sentence above. Allow me to paraphrase in my own words:

“MR. GIBBS: Well, I took your question to mean an incident of foreign — terrorism from — that had threatened the homeland from somebody that was like black or brown and/or Muslim. Do plain old white guys really count Ben?”

Key Findings
(U//LES) The DHS/Office of Intelligence and Analysis (I&A) has no specific
information that domestic rightwing* terrorists are currently planning acts of violence,
but rightwing extremists may be gaining new recruits by playing on their fears about
several emergent issues. The economic downturn and the election of the first
African American president present unique drivers for rightwing radicalization and
recruitment.

— (U//LES) Threats from white supremacist and violent antigovernment groups
during 2009 have been largely rhetorical and have not indicated plans to carry
out violent acts. Nevertheless, the consequences of a prolonged economic
downturn–including real estate foreclosures, unemployment, and an inability
to obtain credit–could create a fertile recruiting environment for rightwing
extremists and even result in confrontations between such groups and
government authorities similar to those in the past.

— (U//LES) Rightwing extremists have capitalized on the election of the first
African American president, and are focusing their efforts to recruit new
members, mobilize existing supporters, and broaden their scope and appeal
through propaganda, but they have not yet turned to attack planning… [Link]

p>So here is the new reality dear readers. It is only domestic terrorism if the person is Arab, South Asian, Muslim, foreign. Only foreign-domestic terrorists. Got that? You heard it here on SM first. Carry on now. Especially you IRS workers or other federal employees.

p>Update: Ennis reminds me about another commonality between many foreign terrorists and Joseph Andrew Stack. Engineering is a popular profession among them. Stack was a software engineer.

p>Update 2: Via Ben Smith, it seems that newly elected Senator Scott Brown SYMPATHIZES with Stack. Why can’t we all similarly learn to sympathize with terrorists more often. Feel their pain?: