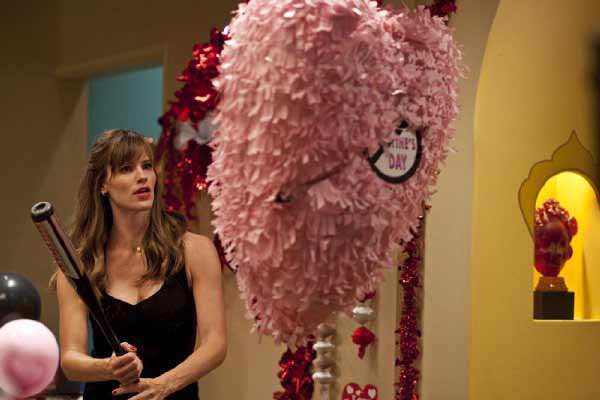 Proclaiming itself the “perfect date movie” Gary Marshall’s new film made me wonder what kind of a date someone had in mind when paying the film this compliment. A multigenerational family outing hoping for bland but pretty entertainment? A date impressed by big names and little substance? Maybe some of both. Valentine’s Day’s love stories are intertwined across generations, from puppy love (Megan Suri, Bryce Robinson) to high school sweethearts (Taylor Swift, Taylor Lautner) to senior citizen romantic saga (Shirley MacLaine, Hector Elizondo) plus at least half a dozen more. It could be fun to see how they ultimately connect, but it’s sort of sympathy-splitting to keep track. The movie spans several LA neighborhoods including Hollywood, Brentwood and bridge-envy inducing Venice. At one point an Indian wedding party adds comic relief to the mix, joining big-name stars in a Bollywood dance at the Golden Karahi.The restaurant books the wedding the same night as the annual anti-Valentine’s Day Party hosted by leading lonely heart Jessica Biel. A raging and romantically frustrated Jennifer Garner whacks a giant heart piÃ±ata with a baseball bat to the sounds of “Aj Mera Jee Kardaa” while Biel and bystander wedding guests relish the violent display. In the style of rejection-letter bonfires anti-Valentine guests toss their tales of heartbreak penned on paper scraps into a flaming karahi. The movie’s soundtrack includes a Stevie Wonder cover by Anju Ramapriyam, “Signed Sealed Delivered I’m Yours.” Lovey fluffy atmospherics abound as florists Ashton Kutcher and George Lopez navigate the city to deliver everyone’s bouquets. That might be just what you’re in the mood for this weekend. Or maybe you’ll wonder if you should have seen Wolfman instead.

5 thoughts on “Valentine’s Day Falls Into a Flaming Karahi”