Under an odd twist of fate, I find myself for the first time in my life actually interested in the glitz and glamor of Hollywood relocating to the cold hills of Park City, Utah. As mentioned in a previous post, I have had a minuscule bit of involvement with the book-to-movie feature film The Taqwacores which will be premiering at the Sundance Film Festival on January 24th. I have recently been asked to join the Taqwacore madness at Utah, from staying in the rented 4 bedroom punk house with 30 other actors and/or punks, to checking out the punk rock shows in Park City and Salt Lake City featuring The Kominas and Al Thawra. I will be blogging about my Taqx experiences for those two weeks at the tumblr site Taqx at Sundance. Additionally, I will also be crossposting/blogging for MTV Iggy about movies, actors and potentially interviews.

My mind is spinning with the prospect that this little blogger now has a press pass to access one of the coolest film festivals there is. And what an amazing year to join the madness. There are a few films at Sundance which I think are Sepia Mutiny worthy to keep an eye on over the next year:

It looks like a cute movie, and definitely is the shoe in for that one movie for this year’s Desi diaspora flick. I am really excited at the prospect of speaking to both Gurinder and Sendhil about their experience working on the film. 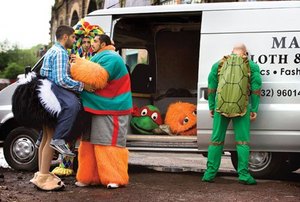 Four Lions tells the story of a group of British jihadists who push their abstract dreams of glory to the breaking point. As the wheels fly off, and their competing ideologies clash, what emerges is an emotionally engaging (and entirely plausible) farce. In a storm of razor-sharp verbal jousting and large-scale set pieces, Four Lions is a comic tour de force; it shows that–while terrorism is about ideology–it can also be about idiots. [sundance]

On the eve of national elections in the Indian village of Peepli, two poor farmers, Natha and Budhia, face losing their land over an unpaid government loan. Desperate, they seek help from an apathetic local politician, who suggests they commit suicide to benefit from a government program that aids the families of indebted deceased farmers. When a journalist overhears Budhia urge Natha to “do what needs to be done” for the sake of their families, a media frenzy ignites around whether or not Natha will commit suicide. Soon Natha becomes a cause cÃ©lÃ¨bre, who draws out the true character and motivations of those who cross his path. [sundance]

Educated at Harvard and Oxford, Bhutto evolved from pampered princess to polarizing politician battling tradition and terrorism in the most dangerous country on Earth. With exclusive interviews from the Bhutto family and never-before-seen footage, filmmakers Jessica Hernandez and Johnny O’Hara have crafted a sweeping epic of a transcendent, yet polarizing, figure whose legacy will be debated for years to come. [sundance]

– Also in the documentary category is To Catch a Dollar: Muhammad Yunus Banks on America.

With millions of microloans to rural entrepreneurs in developing countries, Grameen is now audaciously importing its methods to the bastion of first-world capitalism: the U.S.A. First stop: Queens, New York. With an intimate camera capturing both buoyant and despairing moments, To Catch a Dollar chronicles the evolution of the tiny new branch. Will the solidarity principles translate to a diverse group of inner-city women? As the banking industry collapses, will these intrepid social-justice financiers succeed? One thing’s clear: we need new models to ensure prosperity for all. [sundance]

Yusef, a straitlaced Pakistani American college student, moves into a house with an unlikely group of Muslim misfits–skaters, skinheads, queers, and a riot grrrl in a burqa–all of whom embrace Taqwacore, the hardcore Muslim punk-rock scene. They may read the Koran and attend the mosque, but they also welcome an anarchic blend of sex, booze, and partying. As Yusef becomes more involved in Taqwacore, he finds his faith and ideology challenged by both this new subculture and his charismatic new friends, who represent different ideas of the Islamic tradition. [sundance]

In addition to the movie screenings, Sundance will be be parties, punk shows, and celebrity crush stalking. DJ Rekha will also be spinning at a party at Sundance, and who knows who else will be making an appearance. Frankly, I’m ecstatic at the opportunity to not only participate in Sundance, and join The Taqwacore motion picture team, but to share the experience through blogging. If you want to follow me on my Taqwacore madness, check out the tumblr at Taqx at Sundance, or follow me on twitter @tazzystar. You can also check out the Taqwacore Webzine where other the bands, fans, and scenesters will be writing pieces as well. Finally, a few of the posts will be up exclusively at MTV Iggy.

If it hasn’t been clear to the Mutiny, I’m more of a book and music buff – movies aren’t high on my priority. That being said, I need the Mutiny’s help. I’d like to ask you, If you had the opportunity to interview any of the people involved in the movies above, what would you ask? And who else should I keep an eye out for at this year’s Sundance?

9 thoughts on “On the Road to Sundance”