Over at Wonkette today they were asking a real brain teaser. Which one of these is not like the others? 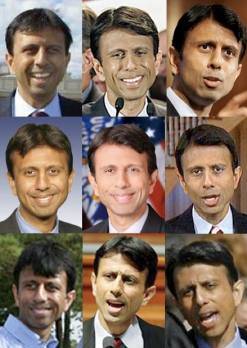 Hey, they do it in every single Bollywood movie or Indian channel serial drama. Why not the official Louisiana Governor’s portrait too? As a comparison, here is his official portrait from the 109th Congress (also seen in the middle left photo). Over at The Root they are wondering if Harry Reid was right?

In an experimental study, she presented a random sample of adults descriptions of “one of three fictitious candidates running for governor.” Each candidate was described in identical terms with the only difference being an attached photograph of either “a white male, a light-complected black male, or a dark-complected black male.” Terkildsen found a statistically significant effect that “black candidates were penalized by white voters based on the candidate’s race, skin color, and individual levels of racial prejudice.”

I bet you, as alluded to in the last sentence, that studies will show that African, Latino, and Asian voters will either conciously or subconciously vote for the lighter skinned candidate too. Like I said, all I have to do is turn on Zee TV to prove this. So I am not going to be overly critical of Jindal for the lighting guy he chose. I am however, going to bow my head in disappointment.

76 thoughts on “Light skinned…with no dialect”