The biggest story in India this week appears to be the central government’s agreement to allow a new state to be carved out of Andhra Pradesh, called Telangana. The new state will include the tech-powerhouse city of Hyderabad, and will be predominantly Telugu-speaking. One news article I read put the estimated population of the new state at 35 million people.

Here is what the new state will look like 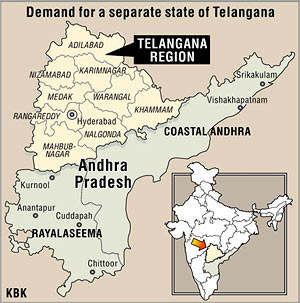 I have known of agitations for a separate Telangana state for awhile, though I must admit I do not know the history in depth, and would be glad to be enlightened by readers who know the region better than I do. However, Wikipedia does offer a few helpful background facts. First, the region that will become Telangana was, during British colonialism, part of the Princely State of Hyderabad, and was only formally merged into Andhra in 1956 — and even then, the merger was controversially imposed by the central government. The agitations for a separate state have been going on for at least 40 years; in 1969, 400 people were killed in agitations for a separate state of Telangana.

I had earlier thought that language was a factor in the demands for Telangana, but in fact language is not mentioned by supporters of this movement, since Telugu is spoken in the other half of Andhra as well. Rather, the focus seems to be on access to irrigation and economic opportunity (see this interview). Are there other factors that people know of?

The news has resulted in the mass resignation of Congress Party-allied MLAs in the other part of Andhra Pradesh, suggesting that the Central Government may not be able to easily sustain its promise to create Telangana without making lots of new promises to the other half of the state. That, or we might see one of those major regional political realignments in Indian politics that can cause seemingly strong governments to fall. (Incidentally, the BJP had promised to create a Telangana state when it was in power, but was unable to do so. However, during the BJP’s five years in power it did create three new states in northern India.)

The news is also expected to give a new boost to other statehood agitation movements in other parts of India; Gorkhaland is one that is often mentioned.

Do you support the creation of Telangana? Isn’t it possible that acceding to these statehood movements in India might lead to a further weakening of an already weak central government? Also, do you think these movements might feed a sense of monoculturalist ‘separateness’ that could make the region a less inviting place for people from different ethno-linguistic backgrounds who happen to live there?

145 thoughts on “A New State in India: Telangana”