Update: I’m watching the news, right now. Fox 5 DC is reporting that Michaele was never a Redskins Cheerleader. The Secret Service visited the couple’s winery this morning, but the party-crashers were not there. The Salahis DID meet Obama via a receiving line, Tuesday night. The Secret Service owned their failure in a strongly-worded statement today; the news said that they are considering pressing charges.

Before it occurred, the State Dinner was all anyone could talk about, here in Washington, D.C. After? We’re still talking about it– and yes, contrary to what some SM commenters think, State Dinners are a big deal. I will admit that my perception is perhaps tainted; I don’t just live inside the Beltway, no, I am surrounded by the chattering class and bold-faced names because I live in Georgetown, home to many elected officials, the journalists who cover them, and the staffers who serve them. So here? The State Dinner Mattered, with a majuscule “M”.

Fashion mattered. Etiquette mattered. The food mattered. Most of all, the “rules” mattered, because following them was how we guaranteed a successful event. One rule which was broken, in what many here see as a daring move to differentiate the Obama administration from those which preceded it? Serving food from the same culture of the guest who was honored:

…the Obamas shook things up by serving, among other dishes, Indian food to an Indian delegation, typically a no-no.

“You wouldn’t try to outdo the Indians; that would not be typical,” said Anita McBride, who served as Laura Bush’s chief of staff and took pains to praise Mrs. Obama as moving in a new direction. “It’s the perfect combination of American food with a nod to the visiting country.” [nyt]

It wasn’t just American food, it was a personal statement by the first African-American president. They may have started with “elite” arugula, but they also served collard greens. Who better to strike such a delicate balance, and to take a considerable risk, than a world-class chef with a seriously cross-cultural back story?

They selected a guest chef, Marcus Samuelsson of Aquavit in New York, an American citizen who was born in Ethiopia, reared in Sweden and cooks up melting pots of flavors and cuisines. [nyt] 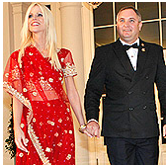 While the culinary “rule” was broken without repercussions, a different, more serious bout of rule-breaking is what has my city (and the world, really) uttering a collective “WTF?” As almost all of you may know by now, two fame-loving, local “socialites” crashed the State Dinner. No one crashes State Dinners, or at least, no one had, until Tareq and Michaele Salahi outrageously swept in and probably caused some poor Secret Service agent to lose his job. Not surprisingly, the Salahis seem to have crashed other events, too (I doubt that they were O’s private, special guests at the Inauguration).

Some of us in D.C. are slightly aware of them because of their association with wine and polo, but what they’re really known for is self-promotion, and goodness, gracious me was this stunt the biggest attempt at that…goal. Neither of their “endeavors” is without controversy, by the way. Tareq Salahi is estranged from his parents with regards to the now-bankrupt Oasis winery (reopening in 2010! Maybe!) and America’s Polo Cup (an APC event may or may not be the excuse they’re using for their un-Stately shenanigans) doesn’t pay its vendors. So it’s not like these two are well-regarded, around here.

Lordy lordy, if I had known that the ex-Redskins Cheerleader preening at my neighborhood salon (Erwin Gomez) was getting gussied up to do THAT, I would’ve stopped and taken a picture of her overly-aerobicized ass while on my way to work. That’s right, I PASSED her while she spent seven or eight (!) hours primping for her daring act of fame-whore roulette. Why so many hours in a stylist’s chair? Because. Reality show cameras were there.

The cable network Bravo confirmed on Thursday that its cameras were following — and filming — an aspiring reality-show couple who managed to attend President Obama’s first state dinner at the White House on Tuesday. [different NYT article]

Before we DC-ers kibitzed over “sari, lengha or dress?”, we were atwitter with news that the infamous “Real Housewives of ____” franchise was hitting Chocolate City, next. Again, living in Georgetown meant that I was mired in it, since this is the neighborhood for Ladies who Lunch. While no one has been cast, several women are being trailed around town, each trying to prove that they’re the “Realest”. Crashing what the NYT called “the biggest and most exclusive soiree to take place in Washington this year” may have been Michaele Salahi’s attempt to outshine her competition, but I hope she ends up with a felony, instead.

Yes, yes, I’m glad that the White House got lucky, that this was the work of “Balloon Boy”-esque idiots and not someone trying to harm the President (or the Prime Minister!), and I know that the Salahis had to go through security to make it in to the tent with their trusty digital camera, but I can’t believe that this happened, that actual famous people had to wait patiently at two checkpoints while these wanna-bes got super-lucky and only bullshitted their way through one…or maybe I can believe it:

How could it happen? A former White House senior staffer — who more than a decade ago encountered a crasher at one of the executive mansion’s less-fancy parties — offered this theory:

A savvy pair of crashers, dressed to the nines, might arrive on foot at the visitors’ entrance, announce their names — then express shock and concern when the security detail at the gate failed to find them on the guest list. On a rainy night like Tuesday, with a crowd of 300-plus arriving, security might have lost track of or granted a modicum of sympathy to a pair who certainly looked as though they belonged there. If their IDs didn’t send up any red flags in the screening process, they would be sent through the magnetometers and into the White House.

And yet, the former staffer noted: Someone from the White House social office should have been posted at the guest entrance with the guards.

Once visitors were in, no one necessarily would ask them for further identification. They could check their coats, give their names to the Marine on duty, walk past reporters and into the lower hallway where guests picked up their table assignments. They would pass the junior staffers handing out seating cards and walk on up the stairs for cocktails in the East Room. [WaPo]

I’m amazed. When I worked in the equivalent of the social office for the Governor of California, wayyy back in the day, we were more careful than this– and that was for events of far lesser importance, and BEFORE 9/11, on top of that. This incident has spawned many questions, and while we have a few answers, more are coming; the Salahis are booked on Larry King, Monday night. Not surprising at all, right?

So to sum up: the Secret Service is mortified, two attention-whores are squee-ing with joy over what they got away with and Bravo is probably smugger than ever about all the free publicity they’ve received. While it pains me to admit this, we may end up better off for all the drama that these reality-tv-aspirants caused. Next time, someone might bring something deadlier than a digital camera to dinner. Perhaps the end result of this fustercluck is that there won’t BE a next time. Um…thanks, Salahis.

49 thoughts on “UPDATED: A “Real Housewife” and her Husband Gate Crash the White House”