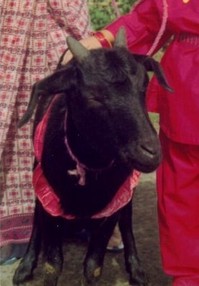 Eid Mubarak, Mutineers! There are two Eids that Muslims celebrate, one marks the end to a month of fasting and another marks the end to pilgrimage to Mecca, called Hajj. Today we celebrate the latter one, Eid-al-Adha. This Eid in particular is the one where a sacrifice is supposed to be made of a goat or cow (the meat is to be eaten later and donated), in remembrance of the story of Ibrahim being asked by Allah to sacrifice his son and his son being replaced by a goat.

It was for this reason, my friends and I joked around about how we needed an Eid goat. Easter has the bunny rabbit, Christmas has Santa Claus. But growing up as a Muslim kid in the U.S., we didn’t really have anything equivalent. I was always told Eid was my version of Christmas, but then, why did all the other kids get presents and we didn’t? As we got older, it seemed like the Eid goat would have been the perfect solution.

Thus, I had already goats on my mind when maitri tweeted the following “I Want a Goat” video [NSFW]. It’s promoting a program, I Want a Goat, where you can design and donate a goat to a village in India. The modern twist is that this video has hipster charm splashed all over it.

I realize the tie between this video and Eid is tenuous at best. I found the the song amusing and the cause seems legit. The project was started by a woman Debbie who volunteered in the village for seven months and saw a similar program run successfully in India. For only a $20 donation, you will be donating a goat to a village in Koraput. Why goat?

For tribal people who are landless, raising goats is a great alternative source of income. Families who breed goats can earn a good profit selling the kids in the local market. The extra income provides a safety net for families that can be used for things like medicine, food during lean periods and farm equipment. While I was volunteering in Koraput, I personally witnessed a village that was transformed by a similar goatery program. Three years ago, Goats & Hopes, a UK-based charity, gave a goat to each of the 37 families in the village. I went to visit the village and was greeted by 96 goats and their families who told me stories of how the goats have given them the extra savings they needed to break free from their debt to moneylenders. The success of this program demonstrates the long-term effects of goats as a sustainable income-generation source. [iwantagoat]

It seems like this project is new and just getting off the ground. Abhi’s already jumped on the goat wagon (“I donated a white goat with gold uggs that I named Darwin using that site.”) If you donate and play on the site, you can even enter for a chance to win a flight to India.

So there you have it. Eid Mubarak and go design your own goat today!

15 thoughts on “The Eidie Goat”