COIMBATORE, India — This ancient city has turned itself in recent years into a manufacturing dynamo emblematic of India’s economic rebirth. But a homicide case playing out in an auto-parts factory here is raising concerns about whether the Indian industrial miracle is hitting a wall of industrial unrest.

“We can’t be a capitalist country that has socialist labor laws“Pricol Ltd., which makes instrument panels for the likes of Toyota Motor Corp. and General Motors Co., was rocked in late September when workers burst into the office of Roy George, its 46-year-old human-resources boss. Angry over a wage freeze, they carried iron rods, witnesses say, and left Mr. George in a pool of blood. Police arrested 50 union members in connection with his death, their lawyer says. Charges haven’t been filed.

The underlying question raised by this story is the size, shape & importance of the manufacturing sector for India’s long term economic development…

Historically, nearly all first world nations initially went through a period where manufacturing formed the bulk of their employment. In the US, for ex, manufacturing has shrunk from ~40% down to 10% of the employed but, that’s still roughly ~15-20M people today – a figure which has held remarkably constant for the past 40 yrs. China, of course has charted a league of its own and currently employs a whopping 80-100M in manufacturing.

India, by contrast, is hoping to pioneer a development path led by the service sector. The potential problem with this is that while gleaming InfoTech giants like Wipro or Infosys make fantastic national champions and headline grabbers, they ultimately employ a very small percentage of the arguably most elite workers in the country (between 1M directly to 5M indirectly ; for comparison, the US IT industry was roughly 7M people in 2000). Unfortunately, the median individual in the 3rd world is usually far from the education / skill level necessary for thes sorts of jobs. For these folks, a factory job that pays a regular wage is both more attainable and, due to the large spill over effects, creates a broader national economy multiplier. The problem, as the WSJ notes, is that the Indian economy employs a comparatively paltry 1 million individuals in the “Organized Manufacturing Sector” and dropping – 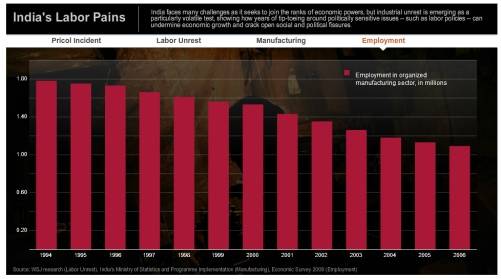 Battle lines are being drawn in labor actions across India. Factory managers, amid the global economic downturn, want to pare labor costs and remove defiant workers. Unions are attempting to stop them, with slowdowns and strikes that have led at times to bloodshed.

The disputes are fueled by the discontent of workers, many of whom say they haven’t partaken of the past decade’s prosperity. Their passions are being whipped up, companies say, by labor leaders who want to add members to their unions and win votes for left-leaning political parties. Adding to the tensions are the country’s decades-old labor codes, which workers and companies alike say require an overhaul.

“We can’t be a capitalist country that has socialist labor laws,” says Jayant Davar, president of the Automotive Component Manufacturers Association of India.

And the unions in part, draw their strength from License-Raj-style laws which introduce a “political loop” in an otherwise highly operational business decision about staffing levels –

…The country’s Industrial Disputes Act of 1947 requires companies to gain government permission before dismissing workers… Manufacturers have long complained that it can take years to dismiss their permanent employees, leading to bloated work forces and hampering companies’ ability to respond quickly to changing business conditions.

Current laws still say that any company employing more than 100 workers cannot fire people without government permission, and the labor commissioner in the government has to be notified of every single person working on the night shift. In addition, no worker can be made to work beyond 75 hours of overtime a quarter.

Combined with militant politics, and an increasingly interconnected global economy, the results have started spilling over into other countries ; the WSJ piece provides some examples –

Needless to say, if I were an MNC thinking about investing in India manufacturing capacity…this would certainly make me think twice.