I cannot claim credit for the eye-rollingly bad title. It appears that this is the media’s favorite play on words for this occasion. They really get a [spicy] kick out of their cleverness. The Beltway is all atwitter today in preparation for the state dinner in honor of Indian Prime Minister Manmohan Singh’s visit. Many have quipped, and I agree, that it looks like a big Indian wedding tent has been built on the White House lawn. Like out of Monsoon Wedding: 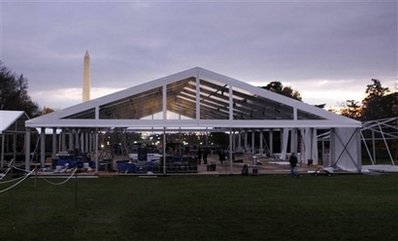 The Menu: Top Secret…for now. Samuelsson reportedly did not create the menu, he is just cooking it. Manmohan is vegetarian though so expect there to be several vegetarian offerings. You can follow the latest on the menu @ObamaFoodorama

The Guest List: ~400 titans of the Beltway and Hollywood, including Oprah, AR Rahman, Bobby Jindal, Nancy Pelosi, HRC sans WJC, and…Deepak Chopra. Thus far no sign of Rajan Zed on the invite list. God I hope not. And what about Padma Lakshmi. Who, if not her, will opine on the quality of the food? Er, as long as there are no hamburgers on the menu, I mean.

So what is a state dinner all about anyways? Ken Adelman at WaPo explains:

State dinners are less “symbolic signaling” than “political greasing.” Sure, they indicate who is important – those invited are on the A-List of Washington’s socialite “plum book” – and what is important – cellist Pablo Casals for the Kennedys and Country & Western music for the Bushes. Beyond that, however, relationships are heightened and debts are deepened by State Dinner invitations. That’s more critical, since personal relationships are central to achieving results in politics, as in most endeavors of life. House Speaker Sam Rayburn once quipped that anyone who couldn’t size up another person in five minutes “doesn’t belong in my profession.” That clueless fellow probably doesn’t belong in many other professions, either. [link]

Politico.com has a convenient live feed set up for those that want to follow.Things have not been all that smooth since Obama took office. Indians love getting attention and there hasn’t been enough attention to go around while the U.S. has been dealing with so many other problems:

Just last week, Indians took great offense at two speeches Obama made on his trip to Japan, China and Korea. In Tokyo, Obama gave a speech on the importance of Asia without once mentioning India. And in a joint statement with Chinese Premier Hu Jintao, Indians saw signs of Obama encouraging a larger Chinese role in mediating relations between historical rivals India and Pakistan.

While perhaps inadvertent, such slights suggest “that nobody in the Obama administration is standing up now for India,” said C. Raja Mohan, a professor of South Asian studies currently on a fellowship at the Library of Congress. [link]

If there are any SM readers invited to this (I am sure there must be at least one) we would appreciate you feeding us little tidbits (anonymous is fine). Surely there will be some drama!

The White House is eager to show that, despite what some Indians see as a lack of attention during Obama’s first 10 months, it values Singh’s country as a key partner in dealing with extremists in South Asia, in settling international trade and global warming pacts and in steering the world economy out of turmoil…

Singh, in comments Monday, expressed optimism about the future of the U.S.-Indian relationship, calling for a “strategic partnership of global dimensions.”

The White House acknowledges that the state visit is meant to signal to India the value the administration places on the growing economic and political power. White House spokesman Robert Gibbs told reporters that Singh’s visit is “a show of respect.” [link]

I request that our readers help me out. If over the next few days you see a particularly interesting photo taken during Prime Minister Singh’s visit, please use the tip line to let me know. The White House’s Flickr feed often contains gems: 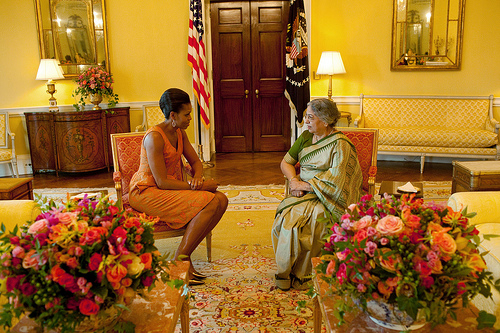 46 thoughts on ““Currying” favor with Manmohan and India”