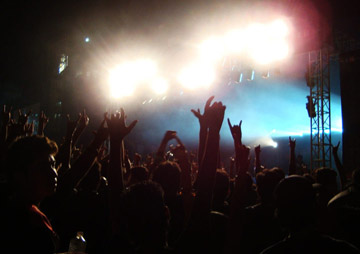 As most SepiaMutiny readers know by now, I work for MTV Iggy. And I don’t mean to keep pimping that stuff over here, but whenever something that might interest you comes up, it seems a shame to not share it. A new special feature just went up on the rock music scene in India, with interviews, live performance footage, music videos, slideshows, and more. Arjun S. Ravi, the editor of a Mumbai-based site that tracks the Indian rock scene, contributed fascinating article on the highs and lows of being a rock music fan in India:

The easiest way to sneak alcohol into Rang Bhavan was to hide it under a girl’s jacket. The notoriously long queues of people waiting impatiently to enter Mumbai’s legendary open air theatre were predominantly male, which meant that the security guards at the gate would only frisk guys. A girl, depending on her stature and the size of the jacket, could slip in anywhere between four to eight cans of Kingfisher beer. Inebriation was as crucial to the Rang Bhavan experience as the Metallica-inspired, ’90s metal cover bands.

In India, rock is a much maligned genre, mostly because it is totally misunderstood. India’s Bollywood-loving masses generally accept and believe the particularly damaging stereotype that rock music is overrun by dudes with knee-length hair screaming into microphones and groaning like cats being tortured by pitchforks. And until the late ’90s, Indian rockers did very little to change that impression.

He goes on to trace the changes (fan attitudes, new kinds of venues, advent of the internet, bands stopped noodling around) that contribute to the fact that Indian rock bands were recently invited to the Glastonbury Festival in the UK, and SXSW in Austin, TX. It’s long(ish) but you can read it in full here. The full special feature is here.

An video introduction to some of the bands (Jalebee Cartel, Shor Bazaar, Them Clones, etc.) is after the jump.

So bands aren’t just playing cover songs anymore, they’re writing their own music and singing in whatever language they please. Do they still sound derivative? Why does India like metal so much? Will this affect the rich musical tradition in India or does it mean there’s more space for all kinds of music? Not exactly epistemological questions, but they are still unanswered and I’m opening the floor to your thoughts.

And please think your comment over before you criticize. The sepia intern will be moderating this closely and a thoughtful discussion will be appreciated.

45 thoughts on “Rock Music In India: Breaking Through At Last?”