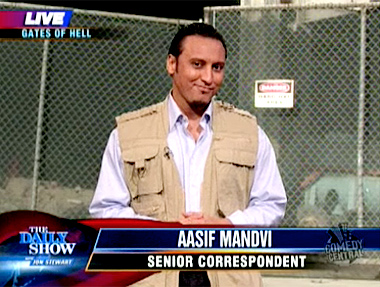 If, like me, you’re addicted to “The Daily Show” with Jon Stewart, then Aasif Mandvi needs no further introduction. If, for some reason, you don’t watch the show (what’s wrong with you? The internets flattened the world, remember? Click here to watch!) then you’ve seen him in everything from “CSI” to Spider Man 2, generally as a fleeting and funny brown presence. And if you happen to be a theater-going sort of person, you’ve seen him in all sorts of things, and may even know that he won two Obie Awards for his one-man play Sakina’s Restaurant. Multi-talented, is our Mr. Mandvi.

Anyway, the play was recently remade into a film (Today’s Special, also starring Aasif Mandvi) that’s been well-received in international film festivals. He was besieged by other press people (damn you, BBC!) at a screening in NY, but he kindly let me email questions which he promptly answered via Blackberry. Get ready for a formal exercise in true journalism (by that I mean ridiculousness):

What was it like to translate your play, Sakina’s Restaurant, into the film Today’s Special? Was anything lost in the process? Yes, we lost all the Monologues, and the fact that it was a one-man show, and we lost most of the characters in the play, and we came up with all-new characters and a new storyline and all-new lines for the characters to say and… come to think of it, I don’t think the two things are related at all.

Which I definitely thought was inappropriate.

(More with Aasif on being Muslim, the secret to getting hired at The Daily Show, sleeping with Margaret Cho, and light sabers. After the jump.) [snip]

As a Muslim, does it get tiring — having to explain Islam to people all the time? It does, but I just make stuff up…like, “Muslims have to eat sorbet after morning prayers.” It actually is no more tiring than having to explain Christianity or Judaism, which I also do.

Do you pattern your character on The Daily Show, the “Chief Foreign-Looking Correspondent,” on anyone in particular? Yes. The most handsome and smartest guy in the world…. It’s a work in progress.

If The Daily Show, which is not a news show (according to Jon Stewart), is so good at pointing out politicians’ contradictions and breaking down world events, why on earth can’t regular mainstream media? I mean, seriously, what’s wrong with them? They hire real journalists. If they hired monkeys riding unicycles like us, then they would be better served.

I read that Jon Stewart hired you for The Daily Show five minutes after he interviewed you. What nailed it? Tell us the secret!!!
Mallomars! 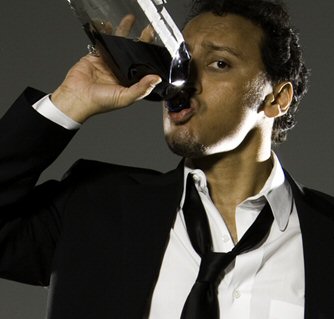 Read the rest of the Q&A here.

The Q&A includes a lightening round of 10 standard questions we ask funny people:

What’s your favorite Desi joke that is impossible to translate to English?

It’s a Gujarati joke: how far is it from Nagpur to Kanpur?…Then you just show the length from your ear to your nose and everyone laughs and laughs.

Who is a comedic idiot? Bobby Jindal

Have you slept with Margaret Cho?

No, she’s ironically the only gay Asian American comedian I have not slept with.

Are funny people doomed to be alone, forever and ever?

What would happen if light sabers existed?

Then my buddy Mike would have to pay me a thousand dollars cos he would be proved WRONG!!!

Today’s Special is playing a the IMAAC film festival. Details here and a full review of the film is here.