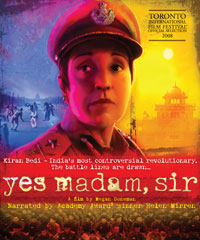 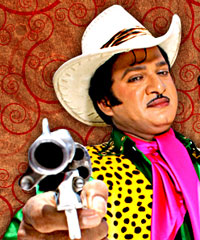 It’s a good thing that the San Francisco-Oakland Bay Bridge reopened this week after freaking out unsuspecting motorists by dropping 5,000 pounds of metal last week. But even if it hadn’t Bay Area indie film fans would have found a way (BART still works, right?) to get to the Seventh Annual 3rd I San Francisco International South Asian Film Festival happening tonight through Sunday, November 5-8. That’s because the festival screenings include some very interesting short films, documentaries, and feature films from South Asia and the South Asian Diaspora. (You can view the SFISAFF trailer after the jump and all the film trailers at thirdi.org and at the end of this post.)

If your time this week/weekend is a miserly taskmaster, you might be wondering which of the films to squeeze in. If instead your time is more like a freewheeling and generous friend, the best answer may be “All of them!”

Yes Madam, Sir, the documentary about India’s first female IPS (Indian Police Service) officer Kiran Bedi, narrated by Helen Mirren, caught my interest. After reading one review’s mention of Bedi “single-handedly” fighting back 3,000 militants “with a wooden stick” during riots, I couldn’t help but be intrigued by this larger-than-life 5’2″ kickass cop. She is scheduled to show up at SFISAFF.

Bedi leads a busy retired life these days involved with humanitarian foundations and resolving disputes in a people’s court TV show–one viewer describes her as a less-caustic Judge Judy. But she may be most famous for towing the car of then-Prime Minister Indira Gandhi for illegal parking and for reforming Tihar, the largest prison complex in South Asia. During her tenure as Inspector General of Prisons, she introduced Vipassana meditation for staff and inmates (related SM post) among other award-winning reforms. Australian filmmaker Megan Doneman got permission to make Yes Madam, Sir from Bedi after the supercop had been turning down other filmmakers for 15 years.

“Sambar western” Quick Gun Murugun: Misadventures of an Indian Cowboy sounds tasty in its plot and looks colorful too. One-upping those cavemen who got their own TV show, Cowboy Murugun made the jump to movies from mid-90s ads for MTV-competitor Channel V.

In the badlands of South India, a lonesome vegetarian cowboy, Quick Gun Murugun, attempts to save the world from the beef-soaked machinations of Rice Plate Reddy, a scheming capitalist who plans to take over the world with his McDosa franchise. (thirdi.org)

If the movie cowboy looks familiar, maybe you know him as actor Rajendra Prasad from Telugu films. I think I saw some of Prasad’s filmography pantomimed last month at a cousin’s birthday party when my mom and relatives played movie charades. Director Shashank Ghosh plans a sequel for the film tentatively and deliciously titled The Good, The Bad and The Idli.

For those of you who plan on going to SFISAFF, what films are you looking forward to? And if you’ve seen any already, let us know what you think!

8 thoughts on “Straight shooters, shorts and more at SFISAFF”