So our favorite Sri Lankan rude girl tweeted her surprise about Obama getting the Nobel Peace Prize: 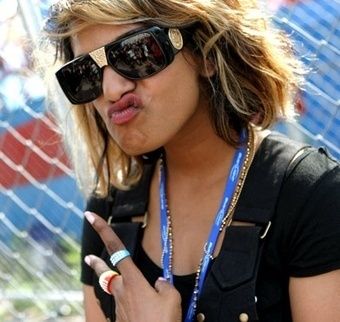 “Obama winning the nobel peace PRIZE? he should give it back like john Lennon sent back his MBE” — @_M_I_A

GROAN. Really, Maya? The sitting U.S. president should give back a Swedish (decided by Norwegians) prize because it’s like a British citizen receiving a British honor… how, exactly? And the Nobel carries the taint of its dynamite origins, sure, but is that the same as the bloody history of the British Empire?

And speaking of history!! Lennon DIDN’T give it back until FOUR YEARS AFTER he accepted it:

John Lennon, along with the other Beatles were made MBE’s in 1965, to much criticism. Lennon justified the comparative merits of his investure by comparing military membership in the order, saying “Lots of people who complained about us receiving the MBE received theirs for heroism in the war – for killing people”. He continued: “We received ours for entertaining other people. I’d say we deserve ours more.” [Source]

Lennon sent back his MBE insignia in 1969, which Queen Elizabeth had bestowed upon him in 1965. He wrote: “Your Majesty, I am returning this in protest against Britain’s involvement in the Nigeria-Biafra thing, against our support of America in Vietnam, and against “Cold Turkey” slipping down the charts. With love. John Lennon of Bag.” [Source]

So let’s see…Lennon happily accepted it in 1965 saying “we deserve ours” more than people in combat, then returned it in 1969 for a list of ludicrous reasons that included the failure of his song with the Plastic Ono Band.

For Obama to refuse the medal exactly like Lennon, he should hold onto it for four years then give it back because he just lost the 2012 election or something. Or wait, even that would be more meaningful.

Lennon’s a genius, wrote great songs, the world lost a poet, (etc., etc.)…and I really do love M.I.A’s songs. All of them. But sometimes, just sometimes, you just can’t help wishing that musicians would shut the hell up about politics because they start sounding like these guys. And that’s just too soul-crushing to contemplate.