Yeah. TMBWITW is now one-half of TMFCITW. Ash and Abhi flew in from Mumbai to chat with the talk show Queen today, and sadly, it was still a clusterf*ck of embarrassment: 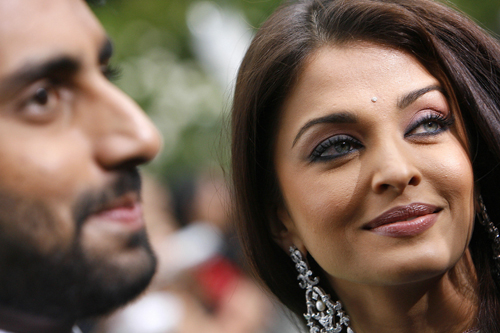 It was as if she didn’t believe in the Bollywood titans’ fame. Or had to put it in terms that Westerners understood.
“They’re the world’s most famous movie-star couple. More famous than Brad & Angelina, anybody…”
Some pictures flashed onscreen of Justin Timberlake skirting paparazzi as he flung himself into an awaiting limo.
“Now imagine that kind of attention times 1000.” She showed footage of them with some Dutch girls in the stereotypical peaked Dutch caps. “They have FIVE! BILL-YON! fans. In Asia, Europe…” etc.
Then, of course, she had to explain that Julia Roberts had called Aishwarya the most beautiful woman in the world, as if only the opinion of a white celebrity could mean anything to her audience. And she couldn’t let them on without mentioning the issue that tickled her last time Aishwarya was on. “Here’s the best part,” Oprah said, gleeful. “They live at home with his parents.”

Aishwarya was wearing a sari and was gorgeous, etc. Abhishek was his handsome self in a velvet suit. Behind them, Oprah’s set background showed an image of shooting stars, upon which the phrase: “Famous Around the World” had been printed. It looked like the banner you sign at someone’s bat mitzvah. When she tried to make a big deal of how this was their first American national TV interview, Abhishek wasn’t buying it. “We sit together all the time.”

He explained how he had proposed to her on the same balcony where he had first longed to marry her. You could hear the “ahhhh…cute” sighs in the audience.

For some reason, the host thought it would be a good idea to keep talking not about the content of their work or Bollywood versus Western cinema types, but just about how amazingly famous they are.

More on the Oprah Bachchan segment on the MTV Iggy blog, and a full recap of the show (the Julia Roberts/Daniel Craig of every country!) in a second post.

102 thoughts on “Ash and Abhishek on Oprah: “The Most Famous Couple In THE WORRLD!””