I was in India earlier this month and while celebrity endorsements are all over the place, these posters for MacroMan Underwear with Hrithik Roshan were particularly, uh, eye catching – 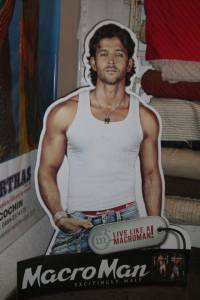 Having lived in the SF Bay Area for over 10 yrs, I probably read too much into the posters & tagline (“Excitingly Male”). However, more interesting & prominently featured in the ad was Mr. Roshan’s polydactyly – long the subject of giggles and hushed tones but proudly displayed for a billion desi’s to proudly gawk at -

In the desh, historically, Hrithik’s “supernumerary thumb” is a good luck sign of sorts. While the surgical procedure to “correct” it is apparently trivial, Hrithik has chosen to, uh, hold on to his extra thumb both for luck and as his own way of keeping it real. Kudos to him – it would certainly be tough to imagine a similar individual in the US making the same choice.