Ted Kennedy passed away today, the third-longest serving member of the Senate in history, and a man who affected the lives of hundreds of millions of Americans. In a family of public servants, he perhaps did the most for our country of any of the Kennedy brothers, and he certainly made a profound impact in almost all of our lives, as immigrants and the descendants of immigrants. Most notably in civil rights and immigration, but also in practically every other walk of life, he has affected the lives of South Asian immigrants. 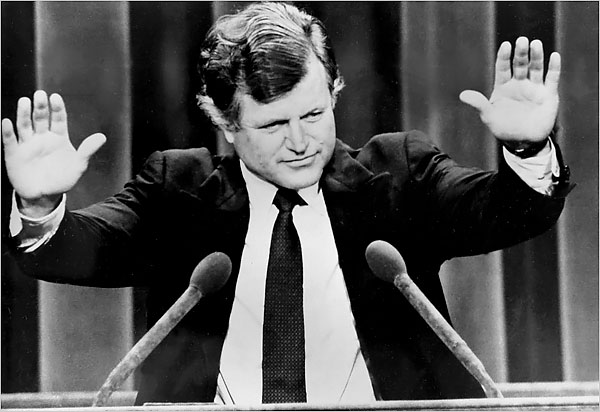 From the moment he entered the Senate in 1962, he was devoted to the causes of Civil Rights and Immigration Reform, in a large part motivated by his own family’s experience. His great-grandparents had been immigrants to the United States from Ireland, and his family had profoundly benefited from the opportunities that America offered while also bearing the brunt of discrimination against Irish Catholics. He recounted these experiences as he fiercely advocated for the Civil Rights Act of 1965, and most relevantly to us, the Immigration and Nationality Act of 1965. Kennedy described how his immigrant ancestry impacted him in an insightful 2006 NPR interview about his work on immigration policy:

(My grandfather told me about when..) no Irish need apply for jobs. They were constantly ostracized and discriminated against, primarily against employment and every other aspect of social-political and economic life. And then they gradually asserted themselves. My grandfather Fitzgerald was the first son of immigrants that was elected to the Congress of the United States, and also a mayor of a major city, which was a major breakthrough. But the sting of discrimination they felt was very powerful and stayed with them. And that became a very important element in the whole restructuring of our immigrant bill in 1965.

The Immigration and Nationality Act of 1965 “abolished the national-origin quotas that had been in place in the United States since the Immigration Act of 1924.” The quotas based on preferences for ethnicities from Western Europe were significantly loosened, opening the doors for immigrants from Africa and Asia to come to this country in far greater numbers.

In 1965, Kennedy was floor manager for an immigration bill that ended four decades of preferences for Northern Europeans at the expense of Asians and other groups and, some have argued, paved the way for Barack Obama’s presidential victory (Slate).

His legislative skill in passing this bill was extraordinary, given the fact that there was no powerful constituency lobbying for people, such as my parents, who were not yet in the country:

Karen Narasaki, who heads the Asian American Justice Center, finds the 1965 immigration overhaul all the more extraordinary because there’s evidence it was not popular with the public.

“It was not what people were marching in the streets over in the 1960s,” she says. “It was really a group of political elites who were trying to look into the future. And again, it was the issue of, ‘Are we going to be true to what we say our values are?’” (NPR)

Kennedy stayed true to those values of tolerance, acceptance, and appreciation of the fact that our country is “A Nation of Immigrants” throughout his career, working hard in the last few years to pass immigration reform legislation, which would have covered legalization of illegal immigrants, a guest-worker program, and border enforcement issues. Though he did not live to see the end of such a measure, President Obama has committed to comprehensive immigration reform early next year, and if it passes, it will owe much to Senator Kennedy’s work.

Many politicians lose touch or relevance as they get older, but Kennedy remained in touch with the concerns of every generation of Americans even as he entered his 70′s. My friends and I were as excited as anyone when he endorsed President Obama back in February of last year, inspired as he spoke of once again “passing the torch to the next generation.”In that same event, Obama said that Kennedy’s values embodied “the best of the Democratic Party,” and never were truer words said. For his 47 years in the Senate, his immigration legislation is the work that most profoundly affected the lives of South Asians, but the staggering body of his work, from healthcare reform to disability empowerment to patient’s rights, touched the life of every American. He was a supporter of anyone who faced disadvantage, discrimination or denial of rights; he was a true champion of the American Dream.

37 thoughts on “Ted Kennedy: A Champion for Immigrants”