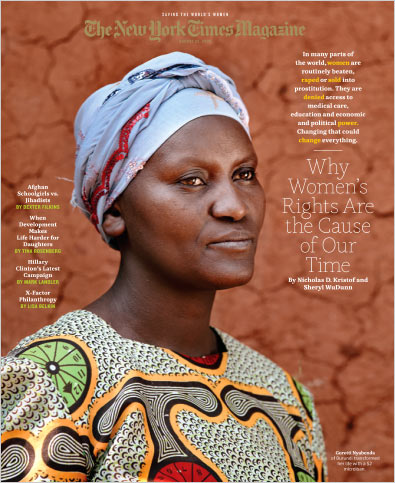 This Sunday’s New York Times’ Magazine had a special and resonant theme: “Saving the World’s Women.” The magazine had a descriptive collection of articles well-worth reading. They covered subjects including the challenge of educating young girls in Afghanistan, an interview with Hillary Clinton covering the Obama Administration’s foreign policy in relation to women’s rights, a troubling trend of gender selection in developing countries, and a growing branch of philanthropy in which women support women’s causes. The cover article, “The Women’s Crusade,” is an excerpt from Nicholas Kristof and Sheryl WuDunn’s upcoming book “Half the Sky: Turning Oppression into Opportunity for Women Worldwide.” I’ll highlight a few of the most important problems and solutions illustrated in the issue here, but the whole magazine is well worth reading, and much of it focuses on South Asia and issues relevant to South Asia. The cover article speaks urgently about the world’s “missing women”:

Amartya Sen, the ebullient Nobel Prize-winning economist, developed a gauge of gender inequality that is striking…â€œMore than 100 million women are missing,â€ Sen wrote in 1990…Sen noted that in normal circumstances, women live longer than men, and so there are more females than males in much of the world. Yet in places where girls have a deeply unequal status, they vanish. China has 107 males for every 100 females in its overall population (and an even greater disproportion among newborns), and India has 108. The implication of the sex ratios, Sen later found, is that about 107 million females are missing from the globe today.

Tragically, another article, “the daughter deficit,” points out that as development progresses in China and India, sexual selection actually becomes even worse. As women become better educated, they have less children, and the implied urgency of having a boy ironically increases than if they had many children:

In Punjab, then Indiaâ€™s richest state, which had a high rate of female literacy and a high average age of marriage…the prejudice for sons flourished. Along with Haryana, Punjab had the countryâ€™s highest percentage of so-called missing girls â€” those aborted, killed as newborns or dead in their first few years from neglect. Here was a puzzle: Development seemed to have not only failed to help many Indian girls but to have made things worse.

There are many more striking facts about the oppression of women globally: 1% of the world’s landowners are women, a woman in India has a 1-in-70 chance of dying in childbirth, girls in India 1-5 years of age are 50% more likely to die than boys their age, 1 million children work in Asia’s sex trade, “bride burnings” take place in India every two hours, and much more harrowing information that is important to read. But for all the bad news, there is also a lot of inspiring news in the magazine. It illustrates that simple steps taken to help educate and empower the world’s women can have a dramatic effect on the problems of poverty and extremism. (The good news after the jump….) The description of Saima Muhammad’s story is particularly powerful. A woman in Lahore, Pakistan, Saima used to be beaten by her unemployed, deadbeat husband every afternoon, and her husband’s family’s mistreatment of her wrecked her spirit. Yet when she thought she had hit an emotional low, she signed up for a microloan from Kashf Foundation, and using the initial $65 seed, created a thriving embroidery small business that allowed her to “pay off her husband’s entire debt, keep her daughters in school, renovate the house, connect running water and buy a television.” She is making sure all her three daughters get an education, and her husband now “accepts orders” from her.

The notable part of this story is not only the effect microfinance had on Saima, but also the effect that the microloan will have on future generations. She will now be able to educate her children, which will hopefully allow them to all become productive, self-sustaining, politically moderate members of Pakistani society and in turn empower more productive, self-sustaining, politically moderate members of Pakistani society. Microfinance is just one of the tools that effectively empowers women in some of the world’s most oppressive countries; thing as simple as providing free textbooks, uniforms for school, improving maternity care, and eliminating iodine deficiencies can also do wonders to improve gender equality, and thus, improve life in the country as a whole. The many writers in the magazine make a convincing case that empowering women is absolutely necessary for a prosperous and peaceful world.

There are a variety of suggestions for ways in which you (yes you, personally!) can help empower women in developing countries: It suggests giving a microloan on Kiva, sponsoring a girl through Plan USA or Women for Women International, advocate at CARE, or finding your own cause that excites you. The magazine left me sure that simple steps to empower women really can change our world.

57 thoughts on “Empowering the World’s Women”