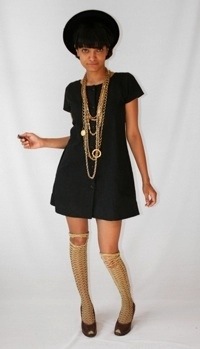 Here’s what she’s doing in her own words:

Starting May 2009, I have pledged to wear one dress for one year as an exercise in sustainable fashion. Hereâ€™s how it works: There are 7 identical dresses, one for each day of the week. Every day I will reinvent the dress with layers, accessories and all kinds of accouterments, the majority of which will be vintage, hand-made, or hand-me-down goodies. Think of it as wearing a daily uniform with enough creative license to make it look like I just crawled out of the Marquis de Sade’s boudoir.

There’s a remarkable simplicity in The Uniform Project, as well as a challenge. (Check out those chains!) It’s also a fundraiser for the Akanksha Foundation’s School Project, a Mumbai-based non-profit that funds uniforms and other educational expenses for slum children in India.

As for her inspiration, it’s the uniforms that kids in Indian public schools had to wear when she was growing up.

Despite the imposed conformity, kids always found a way to bend the rules and flaunt a little personality. Boys rolled up their sleeves, wore over-sized swatches, and hiked up their pants to show off their high-tops. Girls obsessed over bangles, bindis and bad hairdos. Peaking through the sea of uniforms were the idiosyncrasies of teen style and individual flare. I now want to put the same rules to test again, only this time I’m trading in the catholic school fervor for an eBay addiction and relocating the school walls to this wonderful place called the internet.

Girls and boys, if you’ve got some accessories or funds to spare, let her know. In the meantime, check out her 69+ outfits, and counting!