On a more positive note…. City Journal has a review of a fantastic new book chronicling the untold education successes in the 3rd world – “The Beautiful Tree“. 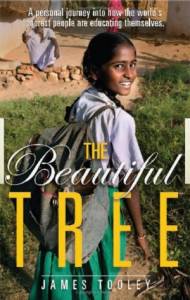 University of Newcastle professor James Tooley journeyed to Hyderabad, India in early 2000 at the behest of the World Bank, to study private schools there. Or, more specifically, to study familiar private schools–that is, those that served the children of middle-class and wealthy families.

But while on a sightseeing excursion to the city’s teeming slums, Tooley observed something peculiar: private schools were just as prevalent in these struggling areas as in the nicer neighborhoods. Everywhere he spotted hand-painted signs advertising locally run educational enterprises. “Why,” he wondered, “had no one I’d worked with in India told me about them?”

I suppose before we get into any other details about these schools, question #1 is – “so how good are they?” And it turns out they are astonishly good - 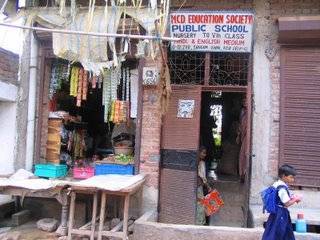 One of my regular themes on SM is how, when it comes to capitalism, the poor often have a thing or 2 to teach the rich. Similarly, there’s a Western conventional wisdom about what education reform looks like that goes a little sumthin’ like this –

“Development experts,” as Tooley calls them, have long believed that if citizens of developing countries are to be educated, their governments, helped by heaps of money from rich nations, must invest in free and universal public schooling. If the resultant public education is lousy–as it is in India, for instance–then it must simply be reformed through more money and more regulation.

The real difference, Tooley notes, isn’t in $$ spent (the private schools are often cheaper per student than Indian govt school spending) or top-down regulation but rather in bottoms-up involvement. Parents hold teachers & administrators far more accountable when it’s their money being distributed & spent within their neighborhood school. Teachers in these institutions have far more flexibility to tailor local programs to deliver results. And the whole thing is free from the Indian education bureaucracy whose goal often seems to be the biggest possible intermediary between parent and school. Perhaps these lessons from abroad will lend weight to our own experiments in private education such as the Harlem Childrens Zone or KIPP.

45 thoughts on “Private Schools in the Desh”