As soon as word of South Carolina Governor Mark Sanford’s adulterous affair with an Argentinian mystery woman hit the streets, Indian American gubernatorial candidate Nikki Randhawa-Haley pulled any association with him off of her website. Sanford who? Never heard of him. Did you check under the bus? 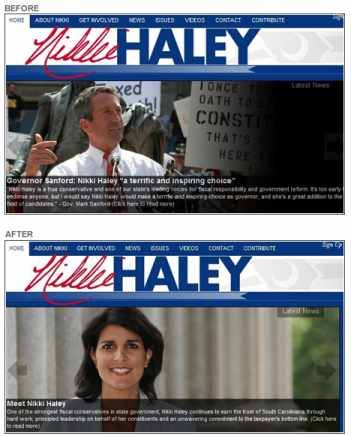 Hmmm, just a week ago some were intimating how close a professional relationship the two had:

Since there’s no question who S.C. Gov. Mark Sanford is backing for governor 2010, the only real suspense left is this: at what point does First Lady Jenny Sanford start getting jealous?

Seriously, Sanford’s abiding affection for third-term Lexington Representative Nikki Haley continues to manifest itself, as the governor blasted out an e-mail to several thousand of his closest friends this morning telling them Haley was “worth getting to know.” [Link]

p>So what does this all mean for Haley? Much of it will have to do with how people react to Sanford. I mean, he messed up real bad, but its kind of refreshing that he has gone off script. People might forgive him and remember the “good stuff” (not familiar enough with SC politics to know what that is) Haley’s camp issued a statement:

Unlike much of the rest of the state party, Haley has aligned herself with Sanford and his fiscally conservative agenda.

On Wednesday, she tried to parse the governor’s policies from his personal travails. She said she and Sanford shared the priority of “treating taxpayer dollars responsibly and changing the structure of state government so it is accountable to taxpayers.” However, Haley said she is also working to promote trust in government. “Obviously, the governor has fallen far short in that regard and that is extremely unfortunate,” she said. [Link]

In the end, I think that her agreeing with Sanford that turning away $700 in federal stimulus was the right thing to do, may hurt her more than his affair.