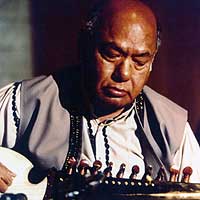 Guitarist Carlos Santana once said that a single note of Khan’s sarod "goes right to my heart," while classical violinist Yehudi Menuhin – who prompted Mr. Khan to first visit the United States in 1955 – once called the sarodist "the greatest musician in the world."

Grateful Dead drummer Mickey Hart, who took drum lessons at Mr. Khan’s college the first year it opened, said …, "All the people who studied there – it changed all our lives. Khan embodies the pure spirit of music; it’s not just the notes, it’s the spirit. Every time I listen to him, he takes me there."(link)

p>Born in Bengal and trained as a disciple in a tradition descended from the famed singer Tansen in the Mughal emperor Akbar’s court [corrected], Khan’s father was Ustad Allauddin Khan, who taught Ali Akbar Khan and Ravi Shankar. He gave his first public performance at the age of 13 in Allahabad. Recording from his early twenties, Ali Akbar Khan was titled “Ustad” or “master” by the state of Jodhpur, where he served as Court Musician to the Maharajah.

He performed, often for hours at a time; gave lessons; and composed for the court orchestra. The post vanished after the maharajah died in a plane crash in 1948, and before long the chaos surrounding independence and partition put an end to the court system, which was already in decline. (link)

Ali Akbar Khan first visited the United States in 1955 and performed an unprecedented concert at the Museum of Modern Art in New York. He also made the first Western LP recording of Indian classical music, [“â€œMusic of India: Morning and Evening Ragas,â€ for Angel,] and the first television performance of Indian music, on Allistair Cooke’s Omnibus, sowing the seed for the wave of popularity of Indian music in the 1960’s.(link)

He founded the Ali Akbar College of Music in Calcutta in 1956, but recognizing the great need for Indian classical music instruction in the United States, he established the school in California. Ali Akbar Khan won a MacArthur Foundation Fellowship ("genius grant") in 1991 and a National Heritage Fellowship from the National Endowment for the Arts in 1997. Known as a master musician throughout the world, he considered his teaching at the Ali Akbar College his greatest achievement.