In between favorites like WWII documentaries, Modern Marvels, and Gangland, the History channel occasionally dabbles in supernatural themed programming. Normally, shows like Monster Quest make me change the channel about as fast as Designing Women. This time however, History will be taking on one of the more colorful incidents of desi-themed hysteria in recent times – no, not Sanjaya but close, the New Delhi Monkey Man –

A four foot tall wandering Hindu sadhu was beaten up by an angry mob who mistook him for the Monkey Man.

On May 18, a van driver was set upon and sustained multiple fractures in another case of mistaken identification as Monkey

p>To prevent future cases of this ilk, Delhi Police have provided this helpful sketch so you can ID the real Monkey Man should you ever run into him – 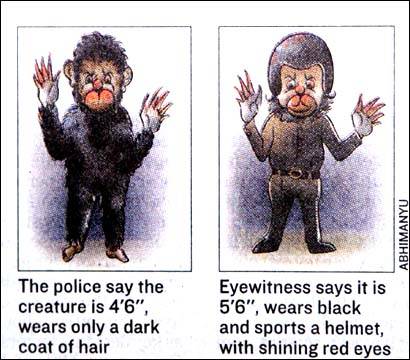 The second mugshot is particularly fierce.

19 thoughts on “The Monkey Man Cometh”