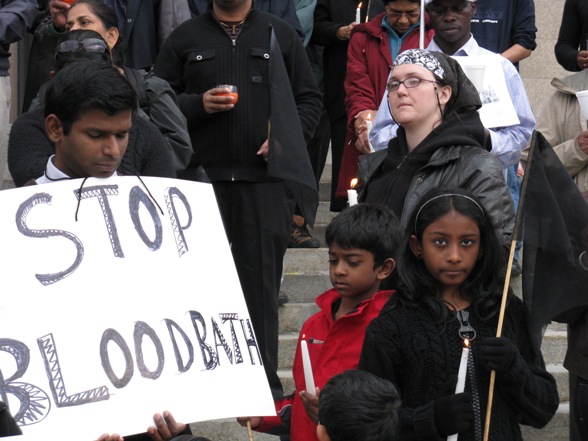 The Tamil-Canadian community in Winnipeg is minuscule compared to the one in Toronto, but they’re also making their voices heard. More than 100 of them gathered Sunday evening on the steps of the  Manitoba Legislative Building for a somber candlelight vigil that centered on prayers and songs. “We can only pray to God now,” said Dr. Mathu Singarajah, a dentist. ”Nobody else can listen to us.”

They held candles, signs, black flags and pictures of children whom they see as victims of the Sri Lankan government’s assault on civilians. While people in Colombo and elsewhere celebrated the apparent end of the 25-year civil war, those at the vigil mourned the deaths of innocent people and wondered what, if anything, had been solved. ”It doesn’t solve anything,” Singarajah said. “People’s grievances aren’t going to be over. This government is so ruthless. They don’t want to give us our rights. As long as that is the case, the problems will go on.”

Anita Subramaniam, a young woman who helped organize the vigil, served as spokeswoman for the group. “I think this is far from over,” she said. “The diaspora all over the world are watching their relatives die and aren’t going to let this go.”

The Tamil community organized the vigil after hearing that 25,000 civilians had just been killed. Because independent journalists aren’t allowed to travel freely in Sri Lanka — some have even been barred from entering the country — casualty numbers can’t be verified and tend to vary considerably, depending on the source. “They need to let the UN go in and investigate,” Subramaniam said.

Two brothers, Neelan, 15, and Vaelan, 10, addressed the gathering, filling in partly for their father, Dr. R. Sri Ranjan, president of the Canadian Tamil Congress, who was away in Toronto. “These are human beings being killed and discriminated against, and it is especially our responsibility, living in a developed country, to act against it,” Neelan said.

Among a handful of non-Tamils at the vigil was Nataly Kuduku, an immigrant from Sudan (top right in first photo). He had heard about the vigil on TV and felt compelled to participate. “Whatever is happening in Sri Lanka has happened in Sudan,” he said, holding a photo of starving children. “I want to add my voice with that of the Sri Lankans.” 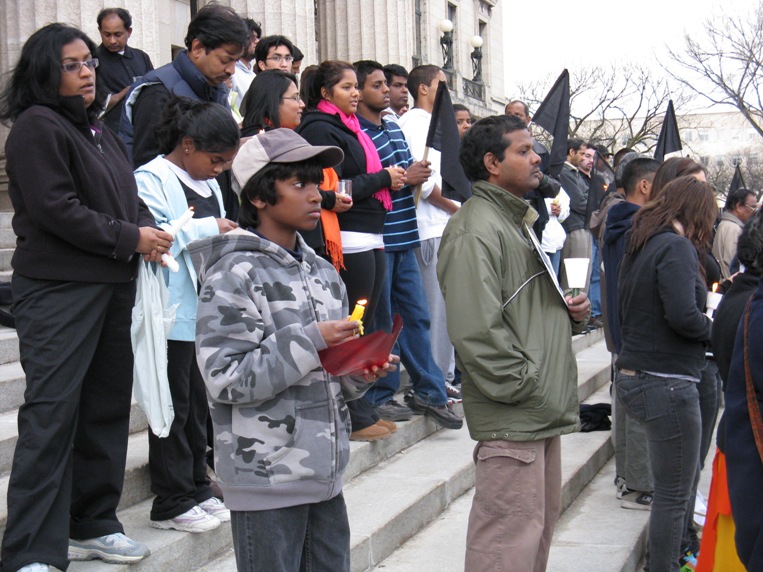 Here’s a video of the vigil uploaded by Peace Alliance Winnipeg:

40 thoughts on “‘It doesn’t solve anything’”