From Whitehouse.gov we see some pictures from “behind the scenes” at the Summit of the Americas that just ended (thanks for the tip Siddhartha). It looks like Obama is giving some guy named Brian Lara advice on how to swing a cricket bat. I am not sure if his form is right. It might be why Tiger Woods was invited to the White House yesterday. It also looks like Obama’s wicket is wide open. You know what time it is. It is caption contest time. Go at it. 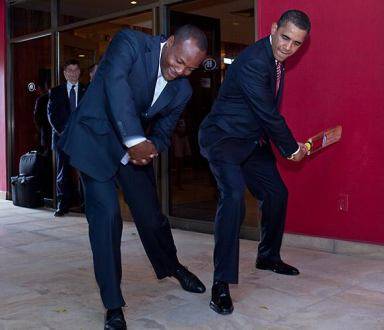 49 thoughts on “Defend the wicket-Caption contest”